Arlington: At the Polls, Voters Fulfill Their Responsibility
Votes

Arlington: At the Polls, Voters Fulfill Their Responsibility 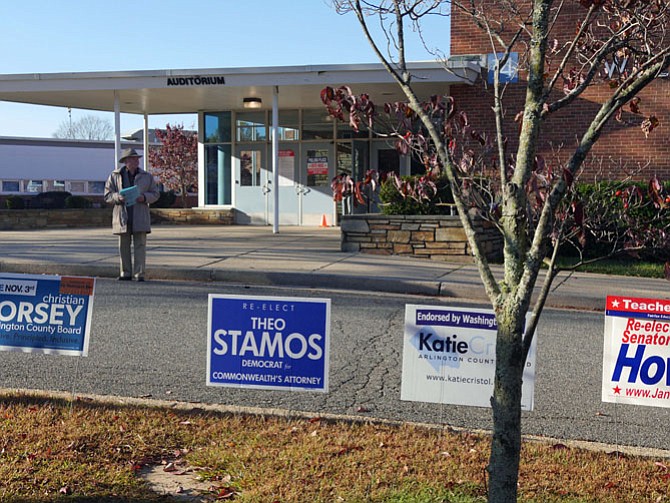 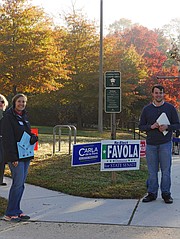 Volunteers for Arlington County Board Democratic candidate Christian Dorsey and Independent candidate Mike McMenamin stand on opposite sides of the sidewalk outside Madison Polling place handing out information on their candidates.

Election day dawns cool and crisp. Variations of red, white and blue election signs line the sidewalk leading to the polling place at Madison Community Center. Polls open at 6 a.m. and by 8 a.m. 160 people have voted. The election official said that voting has been steady and that generally there is a big 6 a.m. rush in the morning with people going to work and another 6 p.m. rush at night with people coming home.

Christian Dorsey, Democratic candidate for Arlington County Board, was outside the building shaking hands of potential voters. "Unfortunately I don’t expect a big turnout — 26-27 percent which is consistent with history," he said. Dorsey said he thinks the key issue for Arlington voters is to feel included. "They want someone who demonstrates they understand even if they don't agree with you. People want to know that you get it."

Amy Peck Abrahamson, at the end of the sidewalk handing out sample Democratic ballots, said, "I'm kind of surprised. There are more voters than I thought, even at 6." 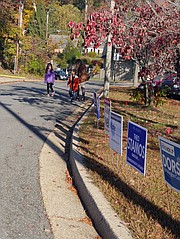 A number of parents bring their children to vote with them at Williamsburg Middle School polling place as a civic lesson since it is a teacher’s workday and the children are out of school.

On the other side of the sidewalk a volunteer for Independent candidate for Arlington County Board, Mike McMenamin, carried beige handouts detailing McMenamin's record and endorsements, shaking hands and urging support. He said McMenamin's major issue is spending: “We need to go back to the basics, less on extra things like the streetcar and Aquatic Center. A lot of people are fed up."

As voters enter, an election official asks, "Would you please state your name and address?" The voter receives a blue Voting Permit card and then heads to the second step, to pick up a folder with a paper ballot. The room is empty of voting machines. Voters sit in small hand-constructed booths with pen and ballot. 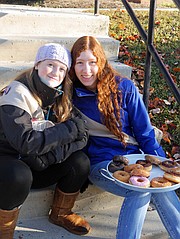 Margaret Paar, chief election official for Madison, explains the legislature passed a law in 2007 that when the electronic voting machines became obsolete they would be replaced with paper ballots. "Our software was so antiquated that our time came to shift over," she said.

The instructions state if an error is made in filling in the boxes beside a candidate’s name that a person should request a new ballot. After two hours of voting only one person needed a new ballot. The finished ballot is fed through a scanner that records the votes mechanically — eaving a paper trail.

As voters leave the building and head back to the parking lot, they pass by Kaitlyn McFarlane and Meaghan Mullins representing Scout troop 588 who offer a platter of chocolate and strawberry glazed donuts to earn funds for community service.

Cars rotate in and out of the parking lot at Williamsburg Middle School as the voters head to the polling spot. Again Dorsey, Goldstein, Favola, Stamos signs line the curb and volunteers hand out sample ballots with identifying party information: “This is especially important this year with local elections because the ballot doesn’t state the party of the candidate.” The line waiting to vote winds down the hall with a father pushing a stroller with twins, several voters on iPhones, a young woman on crutches. The vote tally at 8:30 a.m. at Williamsburg is 203 with people lined up at 6 a.m. when the doors open. It is a teacher workday with children out of school and a number of parents have brought the whole family. A dog barks from an open window in the parking lot and young children skip with their parents headed for "a lesson in democracy."