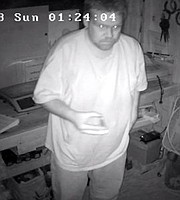 One of the burglary suspects.

Detectives from the 2nd District Investigative Section continue to investigate a burglary of the Potomac Farm Market and are asking for the public’s help in identifying the two suspects.

On Sept. 16, officers responded to the Potomac Farm Market located at 9035 Congressional Parkway for the report of a burglary that occurred overnight.

Anyone with information about these two suspects or this burglary is asked to call the 2nd District Investigative Section at 240-773-6710. Those who wish to remain anonymous may call Crime Solvers of Montgomery County toll-free at 1-866-411-TIPS (8477). Crime Solvers will pay a cash reward of up to $10,000 for information provided to them that leads to an arrest in this case.