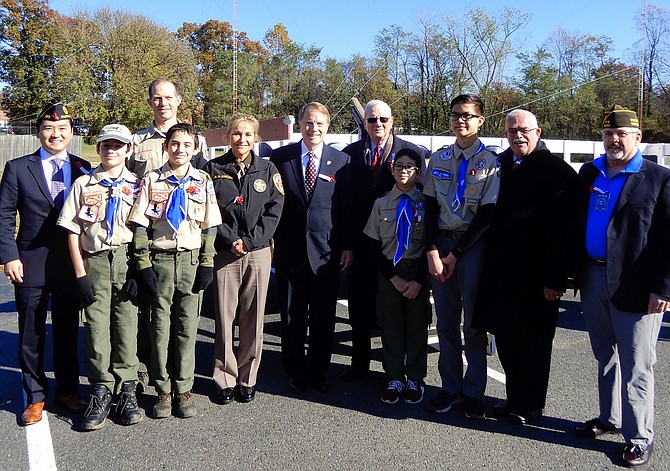 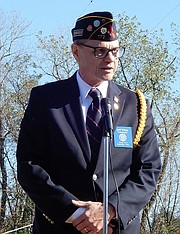 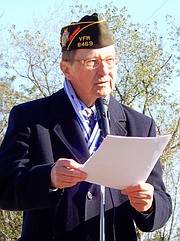 State and local dignitaries, residents and veterans alike gathered Sunday morning, Nov. 11, outside American Legion Post 177 for the annual Veterans Day ceremony in the City of Fairfax. Post 177 and Veterans of Foreign Wars Post 8469 sponsored the event, which significantly ended at 11 a.m. – the exact time, a century ago, on Nov. 11, 1918, that WWI was declared officially over.

In his opening prayer, Mike Semenec, VFW Post 8469 adjutant, said, “Almighty God, today we remember those who responded and went forward to serve, the families who shared their loved ones and waited, the gallant ones who gave their lives, the families who grieve still. And today, those who serve in dangerous places and their families who await the days of reunion. May we have blessings on our nation and our people.”

Semenec said Veterans Day is a time to say thank you and pay tribute to the millions who served and continue serving in the military. He also explained what the VFW and American Legion do to help America’s veterans.

Originally chartered as an organization focusing on service to veterans, service members and communities, the American Legion evolved into one of the most influential nonprofits in the U.S. It now has more than 2 million members in more than 13,000 posts worldwide and has influenced considerable social change. Semenec said it’s won “hundreds of benefits for veterans and produced many important programs for children and youth.”

Also a nonprofit serving veterans, the VFW was initially founded by veterans of the Spanish-American War and Philippine Insurrection wanting to obtain pensions and medical care for their illnesses and injuries sustained in those wars. Now with some 1.7 million members, the VFW was instrumental in establishing the Veterans Administration and national cemetery system.

It also fought for compensation for Vietnam vets exposed to agent orange and for those later diagnosed with Gulf War Syndrome. And in 2008, it helped pass a modern-day G.I. Bill, providing expanded educational benefits to active-duty service members and those in the National Guard and reserves. Furthermore, the VFW helped fund the creation of the many memorials honoring U.S. veterans.

U.S. REP. GERRY CONNOLLY (D-11) was the first speaker during Sunday’s observance. “One hundred years ago, the ‘War to end all wars’ ended,” he said. “WWI was one of the longest, ugliest chapters in U.S. history, with millions of people dead. Today, we can honor those dead by taking care of all of our veterans and their families.”

Speaking directly to the children in attendance, Fairfax Mayor David Meyer said, “It is our hope and prayer that you’re the generation that doesn’t have to grow up with the horrors of wars. But oftentimes, our nation is called on to protect the values we hold dear.”

“We think positively about our country’s future because of our citizens’ commitment to freedom, democracy and our civil liberties,” he continued. Then, to the veterans present, Meyer said, “Thank you for your sacrifice, your service and for ensuring that the values of our country are sustained.”

Fairfax County Sheriff Stacey Kincaid called it “a privilege and an honor to remember those veterans who’ve made the ultimate sacrifice and those who continue to serve. On behalf of all the members of the Sheriff’s Office, we thank you.”

Next, American Legion Post 177 Cmdr. Jeff White told the youth in the audience to “become good citizens and vote, every chance you get. Those rights have been obtained and protected for you by veterans. And don’t forget to keep thanking veterans for what they’ve done.”

The main guest speaker was Col. (ret.) Chris Conrad, a Fairfax resident who served 28 years in the Army, primarily with troop units in Korea, Vietnam, Germany and the U.S. He mainly commanded armored, cavalry units and, later, worked in the Army Chief of Staff’s office. He later earned a Master’s in environmental engineering and worked on improving the environment.

“Today we pay tribute to all those who’ve worn, with honor and pride, the military uniforms of our nation,” he said. Conrad then related what happened last December while he and his grandsons were laying wreaths on soldiers’ graves in Arlington National Cemetery.

“One of my grandsons asked me why so many of the stones had the same, last dates of Nov. 9 and 10, 1918,” he said. “I told them it was because so many of the soldiers died in the same battle – the Argonne Offensive, or 100-Day Offensive – that ended the war.”

DURING WWI, said Conrad, there were 192,000 American casualties – almost 2,000 a day. “That’s why Armistice Day [Nov. 11] was welcomed with relief as a day of thanksgiving,” he explained. “But freedom doesn’t come without effort, sacrifice, courage and commitment.”

He said American veterans are sworn to protect the Constitution’s values of justice, freedom, responsibility, courage and integrity. “And they’re why every generation throughout history has been the best our nation has to offer,” said Conrad. “Our flag waves over our troops everywhere they serve, and in the hearts of every American veteran, long after their time in uniform is gone.

“American warriors never break, never bend and never ever yield,” he continued. “Armistice Day is a day based on love of country, and we must take care of our veterans and honor their service. May God bless you and bless these United States.”

Then, in his closing prayer, Semenec prayed that all veterans feel appropriately honored, none feel forgotten or neglected, and that every one of them feel the “deep and enduring gratitude of our nation and its inhabitants.”