‘They Took That Risk and They Are Heroes’
Votes

‘They Took That Risk and They Are Heroes’ 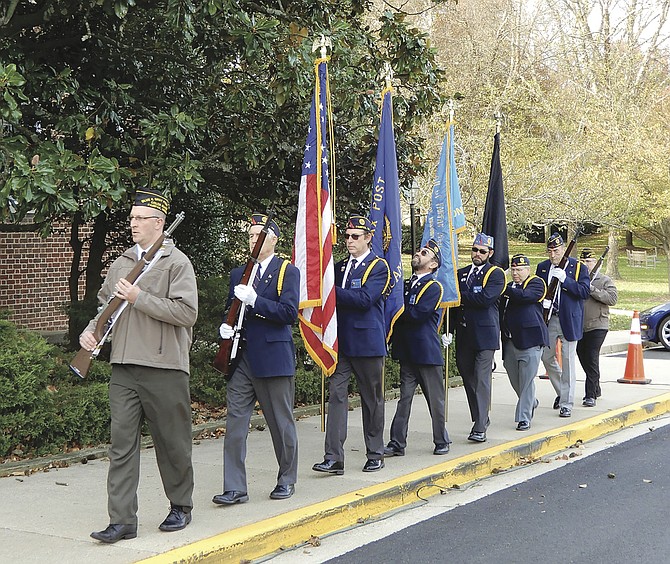 American Legion Post 177 Cmdr. Jeff White (at podium) prepares to lead a moment of silence in honor of the veterans.

America is often called “The home of the free because of the brave,” and that point was emphasized last Monday, Nov. 11, when U.S. veterans were honored in a ceremony outside Fairfax City Hall. Hosting the annual Veterans Day event were American Legion Post 177 and Veterans of Foreign Wars Post 8469.

“On the 11th hour of the 11th day of the 11th month in 1918, the shooting stopped in what was called ‘The War to End All Wars,’ and an armistice went into effect, ending much of the brutality of WWI,” he said. “But that peace was inconclusive and, less than 30 years later, Hitlerism and fascism took hold and we had WWII.”

Connolly said America initially stood by and watched, not getting involved until after the bombing of Pearl Harbor. But once it joined the fray, he said it became clear that “America stands for liberty and justice for all, and both individual and collective freedom. The U.S. became the country others looked toward to preserve peace.”

TODAY, 23 million Americans are veterans. Nearly 1.3 million troops are serving in various places around the globe, and more than 800,000 are in the Reserves. So, said Connolly, “We use this day to honor the men and women who put on that uniform to fight for those values with their blood, sweat and sacrifice. We’re not a red nation or a blue nation, but one nation. And we rededicate ourselves to supporting [our military personnel] and their families.”

State Sen. Chap Petersen (D-34) mentioned his great-grandfather who fought in WWI and noted that WWII, in many ways, solved problems not solved by the previous war. He also talked about how impressed he was by a 99-year-old man he’d met who’d served at Guadalcanal, “where the U.S. Marines literally turned the tide in southwestern New Guinea.”

“I believe two things,” said Petersen. “I believe that, for most of its history, the U.S. has been a positive force for good in the world. And I believe that those who fought and died under its flag did not do so in vain.”

Referencing the recent election, Del. David Bulova (D-37) said, “We’re able to vote because of our veterans who fought so we could exercise that right. My grandfather was a Marine in WWII and, like most veterans, he was hesitant to talk about his wartime experiences. But one day, we bought him a book about Iwo Jima, and he opened up and talked about being a young man on a transport ship going there.

“He said they were all scared, but he put his faith in God and did his duty to his country. When he signed up, he didn’t know what would happen. But he and the others took that risk; and for that reason, they are heroes.”

Furthermore, he said, “We also need to relay their stories to our children so they can understand what these people did to protect and preserve our freedom. That way, they’ll respect and be inspired by [our veterans].”

STEPPING NEXT to the podium was Fairfax County Sheriff Stacey Kincaid, who stressed that 25 percent of her staff are veterans. She also said they get preferential hiring in this county because of their service to the country.

“And we provide resources and services to help them re-enter into our community,” she added. “I’m proud to be among you today, and we salute you.”

Fairfax Mayor David Meyer noted his relatives who were veterans. And he, too, mentioned the “complicated, psychological challenges” faced by many returning home after serving in today’s volunteer military.

He said the City of Fairfax also makes hiring veterans a priority. And, said Meyer, “I express our appreciation to all of our veterans for their service and for ensuring that our democratic way of life endures.”

The next speaker was Councilwoman So Lim. “I came here from South Korea at age 12,” she said. “My brother joined the Army and told me that, although he barely spoke English, they were kind to him. And had it not been for the U.S. soldiers who saved many lives in the Korean War, we would not be here. So thank you to all our veterans.”

Councilman Sang Yi said he came to America at age 4 and had a wonderful life. “My father said, ‘You have no idea how lucky you are,’” said Yi. “My father fought alongside the U.S. Army and was a ROK [Republic of Korea] soldier in Vietnam. He told me one of the best ways to repay that debt is to serve, so I attended the Naval Academy and my patriotism soared.”

“Yesterday, I asked my 5-year-old daughter what a veteran is, and she said, ‘Veterans help people,’” continued Yi. “And we appreciate what people do, we thank them, so I thank everyone for being here today.”

Closing out the program, Jeff White, the commander of American Legion Post 177, said, “Some of the injuries veterans suffer are apparent right away, but some are not – and they get worse with age. What you can do to help is vote – every time you have the chance – and try to encourage policies that will help veterans now and in the future.” But, he added, “This will take commitment and finances from our nation and our communities.”