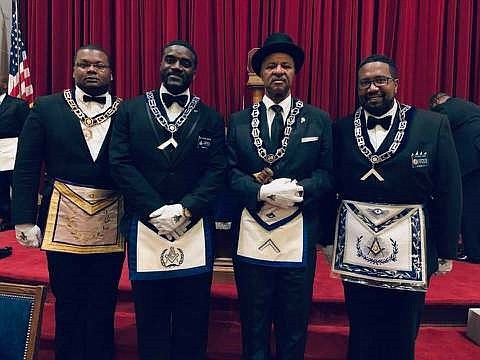 In 1845, 17 years before the Emancipation Proclamation, Universal Lodge #1 in Alexandria became the first Lodge to be organized by African American men in the Commonwealth of Virginia and marked the introduction of Prince Hall Masonry into the state. On Oct. 24, Universal Lodge #1 again made history by becoming the first Prince Hall Masonic Lodge to hold an official meeting at the George Washington National Masonic Memorial.

“On Oct. 24, I was honored and pleased to welcome to the Memorial the Brethren of Universal Lodge # 1,” said George Segher, executive director of the Masonic Memorial. “This historic event was the first Prince Hall Affiliated Masonic Lodge to meet in the Memorial and was well attended by Brethren from Masonic Lodges in Virginia, Maryland and the District of Columbia.”

The Lodge began as the Prince Hall Free Masonry on Feb. 5, 1845, in what was then Alexandria, D.C. It was created by three seaman, William Dudley, Sandy Bryant and Benjamin Crier, who had been initiated Masons at the St. George Lodge #32 in Liverpool, England. They settled in Alexandria in 1838 and became members of Social Lodge #7 of Washington, D.C.

Universal Lodge #1 held regular meetings on the second floor of a house at 424 S. Royal St. in a section of Alexandria known as Hayti.

“Several Grand Lodge officers were in attendance,” said Universal Lodge #1 Worshipful Master McArthur Myers, who worked with Segher to facilitate the event. “Other Brethren visited from Lodges throughout the region to participate in what was a historic event for all Lodges.”