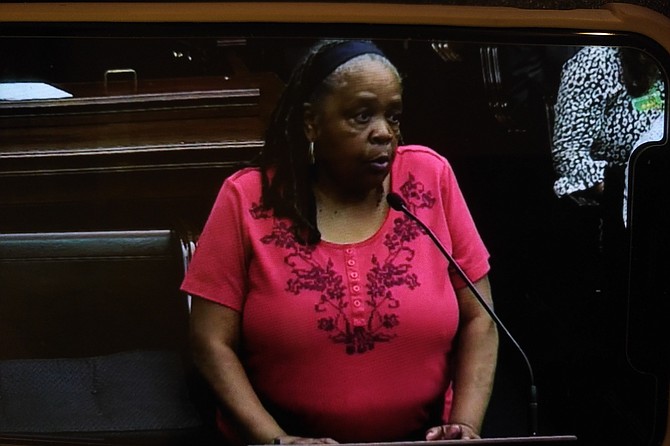 Alexandria resident Phyllis Burke asks members of the Planning Commission to honor a decades old “commitment to the African American community” by not approving the addition of lights at Parker-Gray Stadium at T.C. Williams High School during the Oct. 2 meeting at City Hall. Photo by Jeanne Theismann.

“A condition in an SUP [special use permit] is not a promise.” —Planning Commission chair Mary Lyman

In a 5-2 vote, the Planning Commission approved the plan by Alexandria City Public Schools to add lights to Parker-Gray Stadium at T.C. Williams High School during a marathon meeting Oct. 2 at City Hall.

Thirty-two speakers, both for and against the plan, signed up to be heard at the meeting, which lasted until just before 2 a.m.

“The city and school board should honor its commitment to the African American community,” said resident Phyllis Burke as part of comments relayed by the Alexandria chapter of the NAACP. “It is imperative that we not continue to traumatize this community.”

Burke and several speakers referenced a decades-old agreement between the city and residents who were displaced from the historically African American community to make way for the school in the early ‘60s. The agreement was last renewed in 2013 and a lawsuit was filed Aug. 14 in Alexandria Circuit Court to enforce that agreement.

However, prior to the public hearing portion of the meeting, Commissioner David Brown asked for confirmation from city staff on its legal position regarding the agreement.

“It is my understanding that the city has taken a position that there is no enforceable contract?” Brown asked.

Commission chair Mary Lyman added that “a condition in an SUP [special use permit] is not a promise.”

Frances Terrell, president of the Seminary Civic Association and one of the original residents displaced in the ‘60s, noted that “several city documents refer to a ‘no lights’ promise so an agreement is in place.”

“This property has been owned and lived on by our ancestors as far back as the Civil War,” Terrell added. “We lost several families when it was taken by eminent domain. We have already made tremendous sacrifices for the students of T.C. Williams.”

Lillian Patterson, a fourth generation resident of the Woods Place community most affected by the proposed lights, noted the history of large African American developments dating back to the 1800s.

Supporters of the addition of lights spoke about the need to provide better facilities for ACPS students.

Many speakers in support of the project were parents of ACPS students, who said they were sympathetic to the history of the community, but were focusing on the future.

“I am a parent of a student at TC and I support the addition of these lights,” said Thomas Murphy. “I understand that one side is defending your homes and on the other side we are defending our students.”

After discussion regarding lighting and sound parameters, the commission called for a vote just shy of 2 a.m. Commissioners Stephen Koenig and Melissa McMahon voted against the project, which passed 5-2, but not before several comments were made admonishing ACPS’s handling of the project.

“I am quite troubled by the lack of regard the school system seems to have had towards the concerns of these neighbors,” said Lyman in voting yes to the ACPS proposal. “Is it likely adverse effects can be mitigated? Do we choose the interests of a neighborhood that has suffered so long or go with the interests of the city as a whole?”

Brown noted that the project has the potential to work if all parties work together.

“I understand that there is a constituency that is affected by this,” Brown said. “ACPS has to up their game in dealing with the community.”

In their dissent, McMahon and Koenig both noted that this proposal would in effect establish a city stadium at T.C. Williams.

“This will greatly intensify the use of this land and have an adverse impact on the community,” McMahon said. “The project will greatly dominate the neighborhood and is not consistent with a healthy long-range process.”

The Planning Commission continued several docket items to Oct. 4 and ACPS and city staff were tasked with drafting specific terms regarding lighting, sound and other community concerns for the stadium as a condition of advancing the proposal to City Council on Oct. 13.