‘A Thrilling, Yet Hilarious, Mystery’ in Chantilly
Votes

‘A Thrilling, Yet Hilarious, Mystery’ in Chantilly 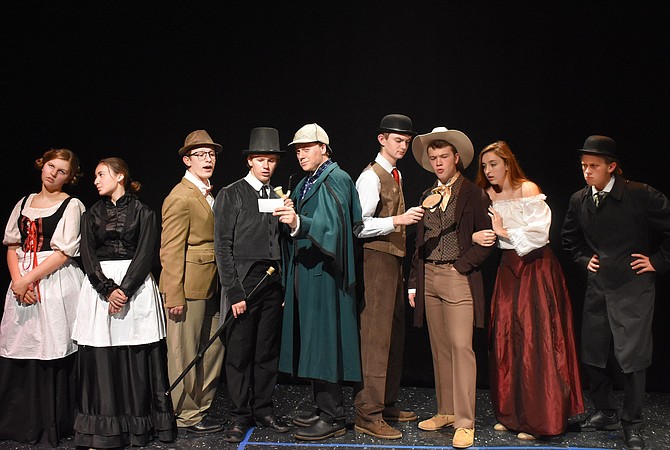 Just in time for Halloween, Westfield High presents a hilarious take on the classic novel, “Hound of the Baskervilles.” Audiences will be swept up in the adventures of legendary crime-fighters Sherlock Holmes and his sidekick Watson in the play, “Baskerville.”

Show times are Friday-Saturday, Oct. 19-20, at 7 p.m.; and Sunday, Oct. 21, at 2 p.m. Tickets are $10 via www.westfieldtheatre.com and $12 at the door. It’s a newer play by Ken Ludwig, and Westfield is the first school in Fairfax County Public Schools to perform it.

“It’s scary/spooky, but is basically a comedy,” said Director Rachel Harrington. “This show will keep audiences on the edge of their seats because of the mystery — and rolling in the aisles because it’s really funny.”

Holmes and Watson are investigating a mystery about an heir to a mansion owned by the Baskerville family. It sits on a moor and has been cursed by their supernatural hound, an English Mastiff. People have been suspiciously dying on the property, and many believe it’s the dog’s fault.

It takes place in 1899 London and Devonshire, England. The characters will wear Victorian clothing; women will be in pastel dresses, and men will wear suits with top hats and tails. Although there’s a cast of just 10, the actors collectively portray 36 different characters, with a variety of appearances and accents. So they really have to put their acting chops to work to pull it off, and Harrington says they’re doing wonderfully.

“They’ve worked on their comedic timing and physicality to play their characters,” said Harrington. “And they’ve had to learn a lot of lines and how to quickly transition from one character — and costume — to another. They layer their clothes, and some of the costume changes even take place in front of the audience.”

“We have a very talented cast of diverse actors, and I’ve been impressed with how they’ve taken on so many, different roles and made them their own,” she continued. “They’ve really stretched themselves to bring this play to life.”

Portraying Sherlock Holmes is senior Josh Moore. “Holmes has a heart of gold, but is very condescending to people,” said Moore. “He’s a grumpy, sarcastic Englishman. He spends lots of time teaching Watson, trying to make him as good a detective as he is, and he takes pride in that. Holmes is a famous detective, and Scotland Yard and regular law enforcement don’t like him because he solves all the cases before they do.”

Moore said this is probably his favorite role so far. “It’s easy to make him funny because he’s always annoyed with everybody else in the room, except Watson,” said Moore. “He also has to be the smartest person in the room; and if he’s not, it really gets to him in his core.”

“Hayden Cutler, who plays Watson, is fun to be with onstage,” continued Moore. “He and I have good chemistry and wanted to act opposite each other for a long time, so it’s cool that we get to now. And it’s great to be the lead and leave my mark on this department.”

Moore said the audience will especially love this show’s “comedy, how easy it is for the cast members to work together and how natural it is for them to be funny. There’s also a lot of action in the play, including people ‘shooting’ at things. And people will love Hayden because he’s funny, charming, smart and works well with everyone onstage.”

Cutler, a junior, describes Dr. Watson as a general surgeon who partners with Holmes to solve crimes. “He’s a little eccentric, but has a strong, moral compass and is gentlemanly and kind,” said Cutler. “He enjoys working with Holmes and is fascinated with him. He views Holmes almost like a scientific curiosity because he’s so different from anyone he’s ever met.”

Cutler likes playing Watson as stoic and serious. But, he said, “When under pressure or excited, Watson starts to act like Holmes does — very much in his own head. And it makes him happy, as well, to solve a case like a puzzle. Then he shows how excited he is — which is out of character for him.”

He said this play is “different from anything Westfield’s ever done, going from funny to ridiculous to serious. It just says, ‘Screw the genres — let’s do it all.’”

Junior Keeley Rogers plays four roles — a bearded man, a carriage driver, a nurse and Miss Stapleton. “It’s exciting being able to portray the diversity of each character,” she said. “Toughest are the differences between them all and changing from one character to another throughout the show.” Her biggest part is Beryl Stapleton.

“She’s married, but her husband tells people they’re siblings and has a nefarious reason for doing that,” said Rogers. “But she ends up falling in love with Sir Henry Baskerville. She’s strong-willed, intelligent and strikingly beautiful, but that doesn’t affect how she acts. She’s a good person at heart and feels trapped, but she wants to do all she can to help solve the mystery.”

Enjoying this role, Rogers said, “I’ve mainly played villains, and she’s totally different. Stapleton has no real stereotype, so I have to dive deeper into her character to really get to what she’s all about.” As for the play, she said, “It’s a thrilling, yet hilarious, mystery that will keep the audience wanting to know more.”

Portraying Sir Henry Baskerville is junior John Henry Stamper. “His family is one of the wealthiest in England, but he’s from Texas, so he’s hilariously out of place,” said Stamper. “He’s the heir to the Baskerville wealth and is set to inherit it from his uncle.”

Describing Sir Henry as “gung ho and enthusiastic — both literally and metaphorically,” Stamper said he’s also personable and makes friends with Watson. “Hayden, who plays him, is one of my best friends in real life, so it’s fun working with him onstage,” said Stamper. “He’s unintentionally funny in the things he says.”

Stamper said it’s “a blast” playing Sir Henry. “Being the comic in a show is new for me, and I’m having a good time with this role,” he said. Overall, he said, “Audiences will like how we break the fourth wall and talk directly to them. They’ll also enjoy all the accents — British, German, Swedish, Spanish and Texan — and diverse cast of characters. And there’s great storytelling; the play is interesting and enjoyable, lighthearted and funny.”