Five years after an officer shot and killed John Geer in Springfield, Implementation Group offers look at successful reforms, and recommends action in other areas. 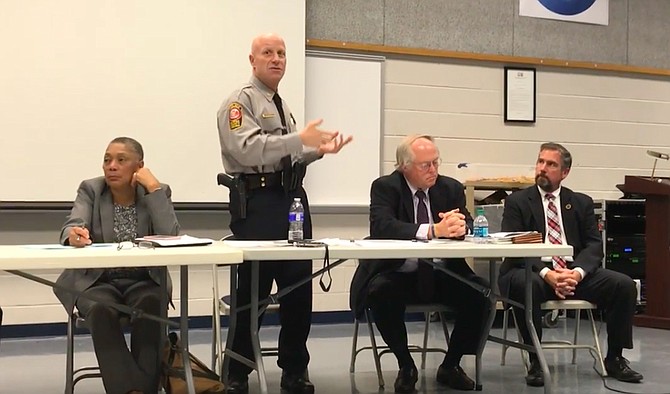 Since the county’s Ad Hoc Police Practices Review Commission formed after a county officer shot and killed John Geer in 2013, the county has implemented 88 percent (179 of 202) of the actions recommended by the Commission.

“The report of the commission could have remained on the shelf since its release three years ago,” said Niedzielski-Eichner, chair.

Board of Supervisors Chairman Sharon Bulova encouraged seven commission members to continue to assist and advise the county and police department as commission recommendations were assessed and implemented.

The informal implementation group issued a Final Report on Fairfax County Police Reform on Oct. 10. The report was undertaken by the group on its own initiative, believing that the community might benefit from an independent discussion of progress.

POLICE REFORMS will increase police accountability, divert those with mental illnesses into treatment instead of incarceration, reduce use of force injuries and death, open public access to incident information, and maintain public confidence in the police department, according to the Implementation Group.

Implemented highlights, according to the FInal Report, issued last week, include:

SOME RECOMMENDATIONS have been approved, but are still in the process of being implemented, including a call for full deployment of body-worn cameras and each patrol officer being equipped with “tasers” as less-lethal alternatives to the use of a firearm,.

The Implementation Group recommends the Board of Supervisors direct the police department to formally respond to findings of an Independent Police Auditor and a Civilian Panel, and to give the public an opportunity to comment on the findings and recommendations. As the group understands, the Chief of Police has chosen not to respond because the Board of Supervisors did not specifically direct him to do so.

The Chief of Police and his command leadership should maintain a “neutral public posture pending an investigation of a police-involved use of force incident,” the report recommends.

THE INDEPENDENT POLICE Auditor’s responsibilities could expand in several areas. The implementation group advocates for: monitoring and reviewing investigations of Sheriff Deputies involved in shootings, in-custody deaths, and any use of force incident resulting in serious injury or death; auditing police use of body worn cameras, providing an annual report to the Board and the public with findings and recommendations; and participation on two internal police review committees, the Use of Force Technical Review Committee and the Vehicle Pursuit Review Committee.

“The Implementation Group urges Chief Roessler and his commanders to sustain FCPD’s reform efforts and, in particular, to unfailingly meet the ‘predisposition to release information’ standard with regard to openness and transparency, and to commit to respond to findings from the Independent Police Auditor and the Civilian Review Panel.”

The report also calls for a data-driven monitoring program that fully leverages data on police use-of-force and other data now being collected in response to the Commission’s recommendations.

Continued public involvement will be key to continuing to build trust with the community, the report says.

“Continued successes and improvements will depend on Chief Roessler, his commanders and continued meaningful collaboration with citizens engaged in implementation,” said group member Randy Sayles.