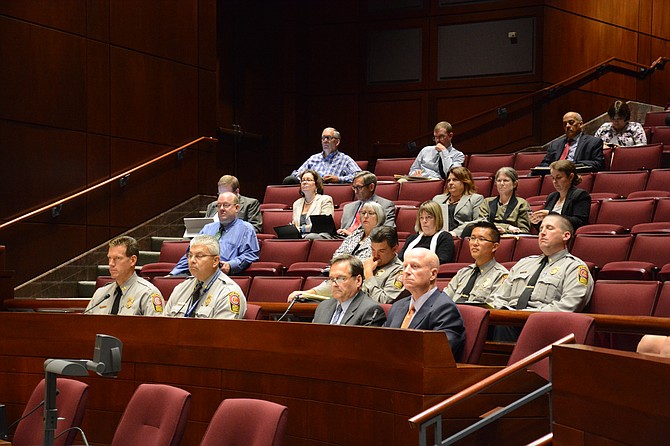 Recent data released by Chief Roessler (front row - right) shows that 40 percent of Fairfax County Police use of force incidents involved African Americans while only 8 percent of county residents are African American. Supervisor John Cook (R-Braddock) offered this as an example of broader policy issues that the auditor could study. Photo by Tim Peterson. 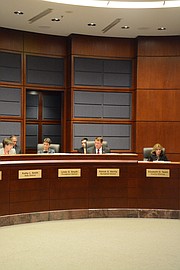 With a unanimous vote on Tuesday, Sept. 20, the Fairfax County Board of Supervisors approved the creation of an independent police auditor office, following recommendations from the Ad Hoc Police Practices Review Commission.

Supervisor John Cook (R-Braddock), chairman of the board’s Public Safety Committee, said the proposal for auditor was true to the essence and “basic philosophical approach” of the commission in calling for an impartial civilian who would review police investigations as they’re occurring and report directly to the Board of Supervisors.

“The auditor would be involved in monitoring and making recommendations in the course of the police investigations, a lot more efficient than waiting until the end,” Cook said. “Police would receive real time comment back from the auditor’s office to help strengthen those investigations.”

Board of Supervisors Chairman Sharon Bulova established the 32-member commission following public outcry over the August 2013 death of John Geer, 46. Geer was unarmed and standing in the doorway of his Springfield home when he was shot and killed by FCPD officer Adam Torres. The police and county refused to release information on the case for more than a year, and then after court orders.

Torres, who was fired in July 2015 and indicted by a grand jury for murder in August 2015, was the first Fairfax County Police officer in the history of the department to be charged in such a death. Torres entered a guilty plea to involuntary manslaughter, received credit for time served for his 12 month sentence and was released in June.

THE AD HOC COMMISSION and its five subcommittees met intensively beginning in March 2015, reporting to the Board of Supervisors in October, 2015, with 142 recommendations, including the recommendations to establish the Office of Independent Auditor.

“This has not been easy, that is an understatement,” Bulova said. “It’s the first time we’ve established a position such as this.”

It is the first independent, civilian oversight of the Fairfax County Police.

Cook said the auditor would issue an annual report, and that the auditor would also be available to engage in policy and practice analysis regarding use of force, as suggested by the Board of Supervisors, County Executive or Chief of Police.

For example, the auditor could study and make recommendations concerning recent data released by Chief Edwin Roessler about demographics of police use of force, Cook said. There were 539 use-of-force incidents in 2015 and data show that 40 percent of those incidents involved African Americans while only 8 percent of county residents are African American.

Cook also pointed out that, unlike an ordinance or land use case, the board may make changes to the independent auditor position in the future.

“If we pass this,” he said, “It would not be shocking at all that auditor could come back and recommend we look at a few adjustments” in the future.”

Commission member and Use of Force subcommittee chair Phil Niedzielski-Eichner called today’s action “a remarkable achievement for the commission’s work.” He acknowledged the vision of the auditor was for a position that would be independent, but not separate, from the police work.

“This gives the public a real feeling of comfort,” said Randy Sayles of Oak Hill, a member of Use of Force subcommittee, looking forward to use of force investigations with the auditor on board, “of the integrity and transparency of the process.”

Commission member Adrian Steel of McLean called the unanimous vote “quite affirming.” He also appreciated the auditor being able to be involved in identifying trends and reviewing policy, again getting back to the disproportionate percentage of African Americans impacted by use of force incidents.

“The whole thought was for the auditor to become involved in picking up these types of things,” he said.

Reston resident John Lovaas, an alternate on the commission for Nicholas Beltrante with the Virginia Citizens Coalition for Police Accountability, said he wasn’t happy with the way he believed the supervisors deviated from the commission’s version of the position.

Other commission recommendations that have already been approved include the establishment of the Diversion First program providing treatment rather than jail for people in mental health crisis and more transparency in police communications.

THE PUBLIC SAFETY COMMITTEE will discuss the creation of a Civilian Review Panel, a complementary oversight entity to the auditor as proposed by the Ad Hoc Commission, at its next meeting, scheduled for Oct. 25 at 1 p.m. at the Fairfax County Government Center.