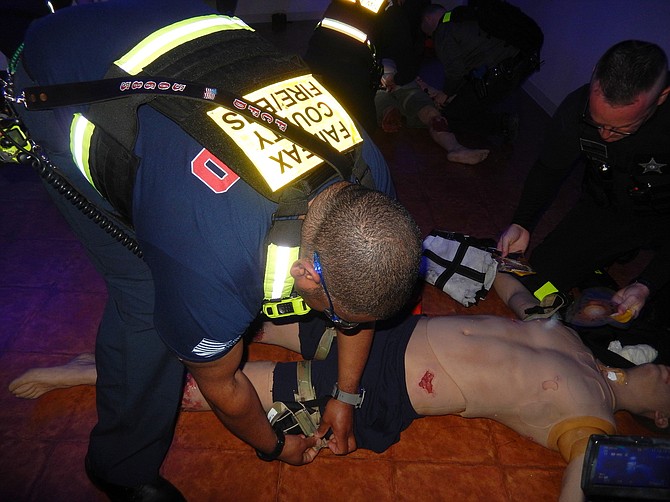 With sirens and screams in the background, police and firefighters treat pretend shooting “victims” (mannequins). Photo by Bonnie Hobbs.

At far right, Police MPO Paul DeHaven, a tactical paramedic, critiques the firefighters and police on how well they treated the “victims” on the floor.

Guns drawn, police search for the “shooter” in an office building.

With an ever-increasing number of active-shooter incidents nationwide, every police officer and firefighter in Fairfax County is receiving six weeks of intensive training in preparation. And a few months ago, they held an active-shooter simulation at a Fair Lakes office building loaned to them by the Peterson Cos.

“We’ll work in tandem with the police to treat patients, so we’ll get used to working together in emergency situations,” said Fire Department Battalion Chief Lee Warner, at the outset. “If it’s a hostile incident, we wait for the police to call us in, so we don’t add to the problem.”

Police Lt. Brian Ruck, an expert in active-shooter training, said, “We’re constantly evaluating and updating our tactics. Our officers are trained to respond rapidly to the threat, engage and neutralize it.”

The simulation began with a call from dispatch telling police to respond to the Fair Lakes address for a report of an active shooter. “The suspect is described as a white male, wearing tan pants and a black shirt and carrying a rifle,” it said. “The suspect has shot multiple people on the second floor, and the caller can still hear gunfire in the background.”

Then, inside the building, fire and police personnel searched for, found and treated the “victims” in low light, while sirens blared and people screamed. Afterward, instructors critiqued their treatment and gave them pointers on doing it better.

The “victims” were special, 180-pound, battery-operated mannequins that can move and bleed. As the first-responders attended to them, applying chest seals and tourniquets as needed, police MPO Paul DeHaven, a tactical paramedic, told them to “Check all sides of the patient, including the back and armpits, in case there are other wounds not immediately visible.”

“When the door first opens and you see the flashing lights and loud noises, you’re a little disoriented,” said MPO Troy Hill, a patrol officer who served in the Marines during Operation Desert Storm. “But once you see the bodies, training kicks in and you focus on the mission. Not every police officer or firefighter is a combat veteran. So this type of scenario — with the loud noises and bodies missing limbs — is important to do and helps us out tremendously.”

Normally, said Warner, about 75 firefighters would respond as a team to a mass-casualty incident. They’d don their ballistics gear and be ready to deploy to the incident command site when called to do so by the police.

“We do this training in the police and fire academies as part of our Rescue Task Force and Joint Operations training,” he said. “Joint training is important because, for example, we use thermal imaging to find people in fires, and we realized we could lend this equipment to police to use, too.”

Warner said everyone participating in the simulation has another full-time job within their organization and does this training as an ancillary duty. But, said Ruck, “We pull our guys from specialty units to do this, and it’s been very effective.”

During the simulation, a firefighter portrayed the suspect, running through the building, firing blanks. Meanwhile, 25 police officers and 25 firefighters responded to three floors.

“We do 56 revolutions of this over six weeks,” said Warner. “We also do it for other jurisdictions.”

“We’re continually training,” added Ruck. “In this simulation, police will come down a hallway, the shooter will shoot, police will engage him, and fire and police will eventually treat patients. The trainees don’t know the scenario details ahead of time.”

Some “victims” were designated fatally shot. But for those still “alive,” said Ruck, “Police will treat them first to stop the bleeding before the Fire Department comes in. Firefighters carry Rapid Trauma Kits with chest seals, tourniquets and collapsible stretchers; police carry smaller versions without the stretcher.”

Knowing how valuable is the experience gained during these scenarios, Warner said, “The firefighters know each other beforehand, but police officers work alone. However, in incidents like these, they have to assemble a team quickly. The bottom line is we can’t do this alone, so we have to work together.”

Furthermore, he said, “This can apply to other calls, if we know each other in advance. If we know each other’s names, we already have a relationship established. So this is where Fairfax County is different from pretty much every other county in the U.S. — our fire and police departments work together as a team.”