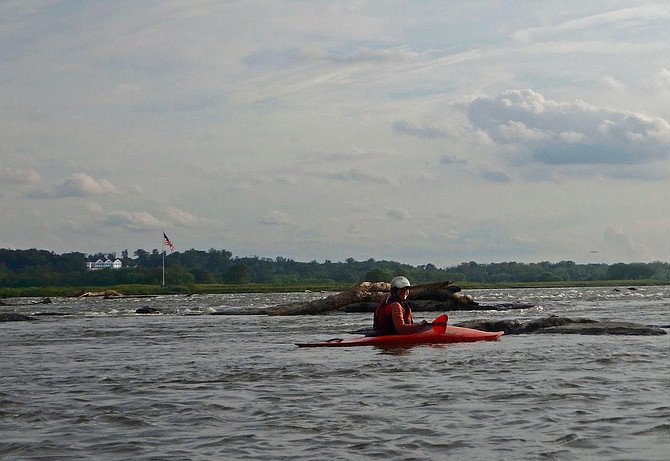 A kayaker on the Potomac River at Seneca. In the background is Trump National Golf Club, Great Falls, Va. The Coast Guard closes the river when President Trump or "high ranking United States officials" are using the club. Photo by Barbara Brown

U.S. Coast Guard boats patrol the Potomac River at Seneca Lake in front of Trump National Golf Club in Great Falls, Va. Recreational boaters are not allowed on the section of the Potomac that fronts the club when the president or other government officials are playing the golf course.

Democracy Forward, a nonprofit legal organization that scrutinizes Executive Branch activity across policy areas, announced Sept. 20 that it has filed a lawsuit on behalf of the Canoe Cruisers Association of Washington, D.C. against the U.S. Department of Homeland Security for “unlawfully restricting access to a key portion of the Potomac River without providing the public with the required notice or opportunity for input, effectively blocking the public’s legal right to access the river during President Trump’s frequent golf trips,” according to a press release.

Canoe Cruisers is a nonprofit organization that promotes canoeing and kayaking in the Potomac River Watershed and engages in educational and conservation efforts to celebrate and protect the Potomac and its tributaries.

“It is unconscionable that public access to this important stretch of the Potomac, which serves as a training ground for generations of paddlers, is cast into doubt so the President can play golf at his whim,” Canoe Cruisers Association Chairman Barbara Brown said in the press release. “The Administration needs to listen to the hundreds of river users who opposed this rule and establish with certainty a reasonable outcome that maintains access to this treasured natural resource while addressing the legitimate security considerations for the President.”

Brown said three weeks ago Canoe Cruisers was having a swift water rescue class with about 25 students, when the Coast Guard, which patrols the river when Trump or other “high ranking government officials” are playing at Trump National Golf Club in Great Falls, Va., tried to force the group over the riffles on the river.

The water was really high, she said; it would not have been safe to take the group over the riffles, so they convinced the Coast Guard to allow them to go down the George Washington Canal and take out at Pennyfield Lock.

“We are not interested in the river in front of the golf course,” Brown said.

The Democracy Forward press release noted that, “when traveling for leisure, past Presidents have generally imposed only temporary and limited restrictions, and these security measures have been individually and publicly documented in the Federal Register. Under the Trump Administration, however, DHS has broken with this practice, instead issuing a rule creating a “permanent security zone” that cuts off the public’s legal right to use a two-mile stretch of the Potomac River abutting the Trump National Golf Club. The rule has created uncertainty surrounding public use of a popular section of the river while the President is golfing.

Potomac Riverkeeper (a non profit organization dedicated to protecting the Potomac River and its tributaries) supports Canoe Cruisers’ action challenging the Coast Guard’s decision to prohibit the public from recreating on a very popular stretch of the Potomac without following the procedures required by law,” said Dean Naujoks, Potomac Riverkeeper. “The Coast Guard can both ensure that the President’s security needs are fully met and uphold the inherent rights of the public to access and recreate on the Potomac, the Nation’s River.”

The press release further states that “DHS issued the rule with no end date, and it took effect without providing the public with notice and an opportunity to comment. In response to congressional inquiry and public outcry, DHS pledged to revisit and revise the rule. But more than a year later, the rule remains unchanged. River users continue to face the prospect of having their right to access an important public resource taken away without any advance warning. DHS could accommodate the public’s concerns by modifying the rule to permit paddlers and other recreational users to pass Trump National on the far, Maryland side of the river, but it has refused to do so.”

“There’s a right way to do things and a wrong way to do things, and this lawsuit is about doing things the right way because that matters,” said Democracy Forward Executive Director Anne Harkavy. “The President can retreat to his private club and play golf, but the Administration can’t shirk its obligation to hear and respond to the public’s concerns about a permanent deprivation of legal access to part of the Potomac River.”