It will be ‘buses only’ for commuters at Franconia-Springfield station and points north. 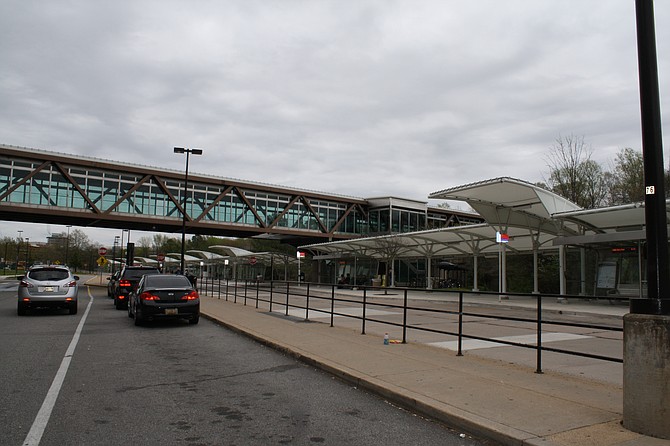 Metro stations closing for the summer.

Metro commuters in Springfield and beyond are bracing for the summer shutdown at the Franconia-Springfield station on the blue line, and all the

The message is on the side of county buses but it's not reaching some.

other stations up to the Ronald Reagan Washington National Airport Station, as Metro embarks on the Platform Improvement Project.

The project, according to the Washington Metropolitan Area Transit Authority (WMATA) is a three-year capital project priced at $300-400 million that will reconstruct the outdoor platforms at 20 Metrorail stations to address structural deficiencies after decades of exposure to the elements. WMATA began announcing the project last year to get a jump on outreach and to ensure the word got around.

Between Saturday, May 25 and Tuesday, Sept. 3, there will be no Blue or Yellow line rail service south of the airport, which includes Braddock Road, King Street, Eisenhower Avenue, Huntington, Van Dorn Street, and Franconia-Springfield.

The Fairfax County Department of Transportation says they have been putting out the word about the closures through their website, through regional partners and “will continue to conduct robust public outreach now, throughout the summer and into the fall,” according to Robin Geiger, head of communications at the FCDOT. Venues that Geiger mentioned were through advertising, media, social media, stakeholder outreach and through other offices, such as Visit Fairfax, Fairfax County Economic Development Authority (FCEDA), chambers of commerce, and community organizations. She also announced that on a recent regional communications call, representatives from the Office of Personnel Management (OPM) stated that they are allowing federal employees to work a flexible work schedule through the summer during the shutdown from May 25 – Sept. 2.

The Franconia-Springfield station is in Lee District and Supervisor Jeff McKay’s (D-Lee) office has been busy putting out the message about the station closure, and the options that will be in place. There is a Powerpoint presentation the office has been using that WMATA put together, and the Lee District outreach staff takes it to every meeting. In addition, McKay has reached out to WMATA to suggest they wave the parking fee at the station for the summer.

For the riders of the TAGS circulator buses run by the Transportation Association of Greater Springfield, the Lee District office is using various methods to get the word out to that group including social media.

“We had WMATA and the county come and do a briefing for the TAGS community,” said Joan Clark, Lee District staff assistant.

Not everyone has gotten the word though. Nicole Miller is a Springfield resident that slugs from the lot in central Springfield. She feels the buses will not be adequate and the information on the closing has not been conveyed to everyone. Though she’s given up on riding Metro and paying $5 to park, she feels the City of Alexandria has put out the message better than Fairfax County. Her emails to McKay’s office have gone unanswered, she said. “When that Metro closes, it’s going to impact everyone,” she said.

At the Waterton apartments, previously known as The Residences at Springfield Station, that sits in between the Springfield Town Center and the Metro station, there hasn’t been much outreach about the project. Hassan Reda moved in a few weeks ago, he wasn’t aware the station was closing, and when he heard, “I’m going to go look it up,” he said.

The Springfield station is one of the stations impacted this summer.

The transportation alternatives are free shuttles, the presentation states, and they include the Franconia-Pentagon Express, Blue Line Shuttle. Huntington-Pentagon Express and the Yellow Line Shuttle. All of these options operate seven days a week. In addition, several Metrobus routes can be used as well, including bus 82, 10A, 10E, 11Y, 21A and Metroway. The Fairfax Connector, the Alexandria DASH and OmniRide are all considering expanded services during the summer.

Although the station shutdown will conclude just after Labor Day 2019, the project will not be completely over.

At Van Dorn Street, Franconia-Springfield, Huntington, and Reagan National Airport construction will continue between September 2019 and May 2020. The location and configuration of these stations allows construction to take place while all rail stations remain open, WMATA said.