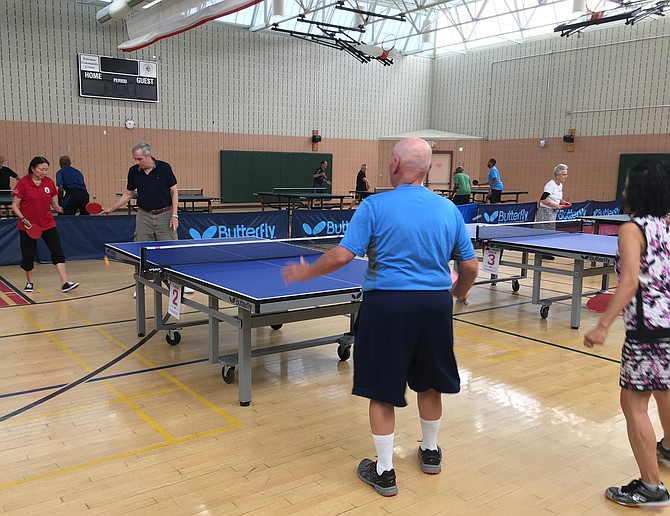 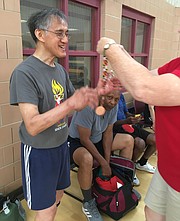 Men and women age 50 and above came from across the state to compete in Singles, Doubles and Mixed Doubles competitions.

Fifty is the minimum age for Senior Olympics participation but Saturday’s competitors included those in their 60s and 70s, and seven players in their 80s.

“Ping pong is a perfect sport for older people,” Pauline Jensen, 63, of Columbia, said. “It’s supposed to help your brain with eye-hand coordination and it’s safe.” She said she also likes the socialization she gets from being part of the sport.

Saturday, she won gold in women’s singles, women’s doubles and was about to compete in mixed doubles.

Age is no excuse for slowing down for Herman Yeh, of Potomac, who will be 80 this year.

As a tournament coordinator, Yeh could not compete Saturday, but he said ping pong is a very serious sport, one that can be played year-round.

It is so popular that the Potomac Table Tennis Club, which is limited to 100 members has a waiting list of 30 to 40.

Among his work Saturday was to remind spectators and players that Paddle Palace, from Tigard Oregon, was a major sponsor.

He said he has been playing for more than 20 years.

“I really enjoy it when I play,” he said. “It’s very challenging and we know each other like friends. We laugh more than we are serious.”

Jensen reiterated the serious fun of the sport.

“Sometimes you win because they mess up more than you do,” she said.

To Participate Is To Win

Maryland Senior Olympics events are going on all through August and into the fall.

To compete in Maryland Senior Olympics, you do not have to be a seasoned athlete or champion in training. You only have to be age 50+ and willing to participate. In fact, MSO's motto is, "To Participate is to Win!"