All the President’s Spymasters
Votes

All the President’s Spymasters

CIA’s top historian examines the relationship between presidents and the agency’s directors. 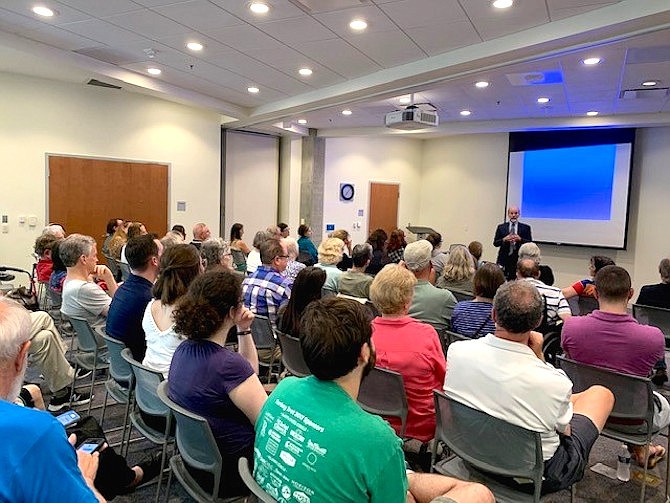 David Robarge, the chief historian of the CIA, talking in front of an audience at the Shirlington Branch Library on July 29. Photo courtesy of Arlington Public Library

Speaking before an audience at the Shirlington Branch Library on July 29, David Robarge, the chief historian of the CIA, described his agency’s relationship with presidents of the United States and how it has been different through various administrations.

A quote from one former CIA director in Robarge’s presentation noted the lack of knowledge that people have regarding intelligence as a practice. “Intelligence is probably the least understood and most misrepresented of all the professions,” according to the late Allen Dulles, who served as CIA director from 1953 to 1961 under Presidents Dwight Eisenhower and John F. Kennedy.

“Intelligence is broadly misunderstood… Lots of people think they know about it because they read a lot of novels, watch a lot of movies, and maybe occasionally read a good nonfiction book about it,” said Robarge.

In Robarge’s view, the people who adhere to this way of thinking extends to many journalists, historians, and policymakers. Moreover, he noted that the CIA doesn’t have a trade association or lobbyists, with the exception of a retirees organization, that can advocate on its behalf in Congress like other interest groups, such as the National Rifle Association or Planned Parenthood.

THE LAW that created the CIA, the National Security Act of 1947, does not specify what the relationship between the president and the director of the CIA shall be. It is up to the president to determine, according to Robarge.

“It’s totally the president’s call about how he wants to run his national security apparatus and where he wants [the] CIA to fit into that,” said Robarge.

Robarge made the argument that the type of director a president appoints determines the relationship between the two. Robarge described five different types of directors. The first is an “administrator” who runs the agency from day-to-day and seeks to “keep it out of the headlines.” Then, there are the “operators” who are selected when the president wants the CIA to play an important role in the president’s foreign policy. The agency goes beyond collecting and analyzing intelligence to playing a role in developing policy.

When policies fail or controversy arises from them, it often leads to the director of the CIA. After these situations that arise, the president will bring some kind of “reformer” from either inside or outside the agency to make changes. The other type of director that a president will bring in is a “restorer” that seeks to mend relations with “Washington and the American public,” according to Robarge.

“One very interesting difference” Robarge found from his research was a clear partisan difference between Republicans and Democrats in the type of people they appoint as CIA directors. He said Democratic presidents tend to appoint administrators or reformers while Republican presidents will appoint directors from across all five of the categories mentioned.

Robarge speculated as to why there is such a difference. “Historically, Democrats have been domestically oriented and they have had less international experience in their lives, particularly their public lives. As a result, because they don’t understand or know what to do with intelligence and they sometimes come into office with an intelligence problem from the predecessor, they are far more inclined to appoint reformers or administrators to clean up the mess [and] to keep the agency out of the headlines.”

Robarge added that Republicans “have tended to have more familiarity with foreign policy and intelligence and military affairs. Consequently, they have not looked at intelligence coming into office as a potential problem — something that needs to be either cleaned up or controlled or kept off to the side, but rather something to use or not to use” at their discretion. “It’s that comfort level from that experience that enables them to be selective about the types they want to have running the agency,” said Robarge.

Robarge suggested things for the audience to look for among the presidential candidates regarding national security issues. He said to observe the people a candidate surrounds themselves with, particularly the official nominees after the conventions.

The candidate will “always pull around them a little constellation of advisors. Look at the people that those candidates pick as their foreign policy and national security advisors. That will give you a signal about their world outlook, their probable foreign policies, and possible insights into how they are going to use the intelligence community to advance the foreign policy or not,” said Robarge. According to him, the next CIA director could possibly arise from that inner circle.