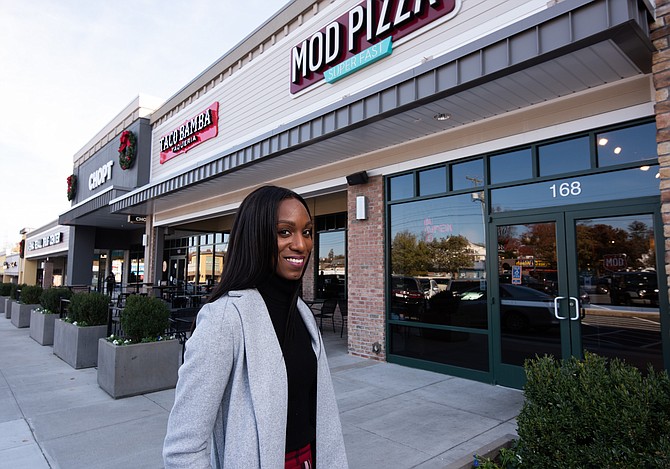 Local businesses are getting a boost this holiday shopping season with the introduction of Natalie Monkou, the new economic development manager who is kicking off the season with a listening tour. Meeting up face to face will give her a glimpse of what’s out there for Vienna businesses. “I plan to get feedback from as many community stakeholder groups as possible,” she said.

She knows there is change occurring in and around Vienna, and economically, the introduction of Amazon to Arlington, the downfall of the brick and mortar stores nationwide, and the huge widening project on I-66 impact the commercial scene in Vienna in one way or another. Monkou has experience working in Arlington when March of Dimes and Nestle arrived to boost that economic picture, and before that, she was in Prince George’s County as the special assistant to the deputy chief of economic development.

Shopping on the internet has impacted the local retail establishments around Fairfax County, but shopping in Vienna on Church Street and Main Street has a colorful side that the web shopping lacks. “A lot of people are looking for experiences when they shop,” she said. “It’s one of the things I’m going to talk about,” on the listening tour, she said.

Having a supporter of the town’s strategic plan will help, said Town Manager Mercury Payton, who noted the impact of strong local businesses and a vibrant downtown area. “Having an economic development manager who is focused on supporting existing businesses and partnering with potential businesses will result in a healthier, even more vibrant Vienna,” he said. He also sees Monkou’s role as a relationship-builder, helping to connect property owners with perspective businesses and business managers with assistive resources as well as collaborating with Fairfax County’s Economic Development Authority.

Monkou has an undergraduate degree in English and a master’s degree in public administration, both from the University of Maryland. She’s a resident of Annandale, and enjoys traveling, spicy foods, and brunch.

When the position search was launched by the town, Monkou stood out amongst a very competitive pool, says Payton. He wanted a candidate who would not be intimidated by the pressures of the Northern Virginia region and who could be effective almost immediately. He was impressed by Monkou’s economic development experience in Prince George’s County and Arlington, where she was part of a team that, he says, had “headline-grabbing economic development wins.”

Although the situations may have been a little different in Arlington and Prince George’s County, the skills she used elsewhere “can be applied here,” as well, she said.