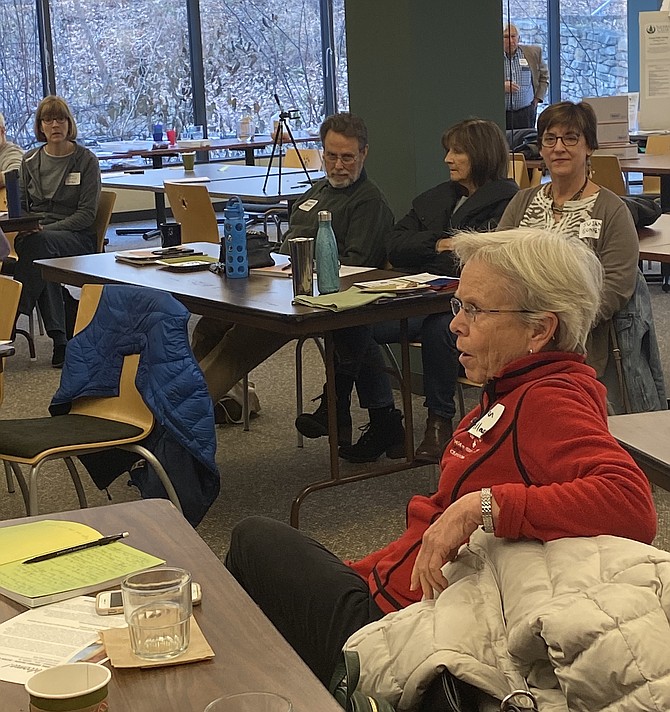 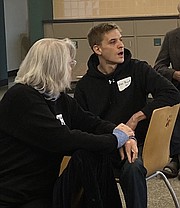 In preparation for the Virginia General Assembly, 2020 Session, the Virginia Conservation Network and its Network partners convened Saturday, Dec. 7 in Richmond, for a preview of environmental issues in the coming session of the General Assembly. The group provided information for a collective approach to advancing policy. 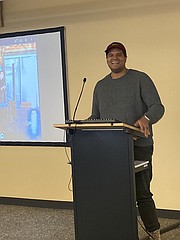 "All watch parties across the Commonwealth will be viewed simultaneously. The only thing different is the location and sponsors. The goal is partially to raise awareness of environmental issues in the Commonwealth but also to empower and excite attendees and the public to take further action. They can take action through our partner organizations in their programs," said Gatlin.

AFTER EACH SPEAKER’S REMARKS, watch party attendees could text their questions into Richmond. "We will try to get in as many questions as we can and tend to get questions from every geographic area, some specific to that region based on the topic. The transportation funding question has been popular in previous years in the Northern Virginia region," Gatlin said.

Paul Duncan of Fairfax attended the Reston event with the goal of education and action. "I'm here today because I'm eager to learn what's possible for Virginia, now that Democrats have taken control. I want to know how I can contribute," he said.

For twelve-year activist Susan Stillman of Vienna, there wasn't anything more important than dealing with policy and climate change as well as powering Virginia with clean energy. "Policy in Virginia needs to change relative to our investor-owned electrical utilities," she said.

According to Alex Rough of Reston, political and transportation chair of the Great Falls Sierra Club, Northern Virginia is the “capital of the Internet, with about 70 percent of the world’s Internet traffic passing through the region.” “New Virginia Dominion Power fossil fuel projects are being undertaken at the behest of the data center growth in Northern Virginia. …Otherwise, the demand for new fossil fuel infrastructure is relatively flat. I implore Virginia state leaders to support legislation demanding new data centers projects be based on 100 percent renewable energy,” Rough said.

Douglas Stewart of Fairfax City focused on building sustainable communities by curbing vehicle pollution and transforming transportation. "I'm interested in creating more walkable, bicycle-friendly communities. That's why I'm here today. I like this environmental community, and it’s a great way to act on my priorities. I love to walk and bike, and by doing that, I can help the environment by reducing pollution. It all fits together," he said.

Susan Bonney of McLean came to learn what Virginia bills needed to pass to stop construction of "fracked natural gas pipeline," she said. "I learned today that the pipeline developers' energy demand forecasts are now so off and wrong that there will not be a public benefit from the Atlantic Coast Pipeline and Mountain Valley Pipeline. Our General Assembly needs to pass bills that will make state agencies do transparent analysis to investigate the need for pipelines that impact our water and communities."

"I am more hopeful for positive environmental legislation for Virginia in the upcoming 2020 General Assembly than I have ever been before,” said Plum. “The public is more acutely aware of the dangers of climate, and they voted accordingly in the last election. The new members coming into the legislature are more environmentally conscious and friendly than many from the past."

At 9 a.m., Saturday morning, all watch party locations connected to the Richmond In-Person Preview, hosted by Virginia Conservation Network, The Frontier Project at 3005 West Marshall Street, Richmond. Mary Rafferty, executive director of Virginia Conservation Network, emceed the two-hour presentation. “Each year, we work with 225 (partners) to come up with the year's agenda and work to ensure that we push it forward throughout the year but particularly during the General Assembly Session."

"This year, we have the wind at our back in at least three ways. We have our governor's commitment to triple the size of the portion of the general fund for natural resources. In 10 days, he's going to introduce his Biennial Budget for the next two years. This is what he is committed to doing. We don't know what it is going to say yet, but we have optimism based on his commitment. And third, the energy brought in by the new General Assembly on the environment."

Sheldon said, "An important tool we want to leave as it is, is the Land Preservation Act Tax Credit. It's a very effective program and very popular." Virginia allows an income tax credit for 40 percent of the value of donated land or conservation easements.

Bold action on climate, the second statewide conservation priority was the topic for Will Cleveland, Southern Environmental Law Center and Harrison Wallace, Chesapeake Climate Action Network. "You've probably heard me talk about this before, that's the Regional Greenhouse Gas Initiative. I think this is the year we are going to get this up and have the most equitable version of this bill," said Wallace.

According to Cleveland, there are four pillars to reduce greenhouse gas emissions, the first to reduce carbon emissions from the power sector. "That means fewer coal plants, fewer gas plants. REGGIE is how we do that...The next thing we need to do is to reduce the amount of energy we use. ...The less you use, the less you pay. There is going to be legislation this year that will require the utilities to hit certain energy efficiency saving targets – making sure they are burning less. …Energy efficiency is actually the single most labor-intensive type of energy resource out there while being the cheapest. It creates the most jobs. It saves the most money. We don't do nearly enough in Virginia. We are going to see legislation do that," said Cleveland. "The third pillar is distributive generation… We have, in Virginia, laws that allow customers to put solar on their roofs. There are, however, some limitations on what you can do; how much you can have, where you can put it. We are going to see legislation this year…to remove the existing market barriers…so more people can go solar. ...We call it 'boots on the roof.' That's how you create jobs in clean energy.

“The last piece [is]…building out utility-scale solar, building out the offshore wind. There are good ways to do these things, and there are the Dominion ways of doing these things," Cleveland said.

"The plastic bills are pretty straightforward; what we are expecting. There are two in the Senate that have already been introduced. Senate Bill 11 is a local option tax on paper and plastic bags, with a 5-cent tax for those bags. Four cents going back to the locality so they can use it appropriately as they see fit. One cent goes back to the distributor of the bag; that helps offset the cost. SB 26 is a 5-cent tax on a plastic bag given to a customer free of charge for Chesapeake Bay Watershed. Both of these together would create a really strong plastic bag plan for Virginia going forward.”

In the third and final presentation, Mary Rafferty, Virginia Conservation Network, offered, “Tools and Strategies for being an Effective Conservation Advocate in 2020,” a guide on how to communicate with legislators throughout the year to show that protecting Virginia's environment is a priority. She shared that information on how to get in touch with state legislators could be found at http://vpap.org.

REGIONAL DISCUSSIONS followed the live stream. At the Reston Watch Party, comments ranged from the amount of electric energy used by Northern Virginia data centers, eradication of solar energy barriers and that the Watch Party marked six weeks until the start of the 2020 legislative session. Attendees reiterated the need to reach out to legislators while Gatlin reminded all to mark their calendars for Jan. 28, 2020, Conservation Lobby Day, to ensure a strong voice early in the legislative session.

Virginia Conservation Network is "a facilitator of strategic action, a resource for Network Partners statewide, and a constant conservation presence in Virginia's Capital. The organization and its staff focus on strengthening the conservation community as a whole and winning environmental victories that benefit all Virginians." Visit www.vcna.org for more information.

“Personally, I have a few priorities. First, I am introducing legislation to ban fracking east of I-95.

“I will also be introducing legislation to begin to prepare Virginia for electric vehicles including ‘right to charge’ legislation to prohibit condominium and homeowners associations from restricting owners rights to install chargers in their own parking lots along, with an electric vehicle purchase grant program (in lieu of a tax credit).

“I will also be introducing legislation to allow community net metering so that groups of homeowners can build solar panels on third-party property and reap the benefits on their own electric meters. This is the only way people can get solar in more established neighborhoods such as most of those in the 36th District where mature tree cover limits neighborhood solar potential.”

"I am proud to be an ally and partner of the Virginia Conservation Network and its partners. I support their 2020 legislative efforts and will personally be filling legislation which furthers their goals and visions."