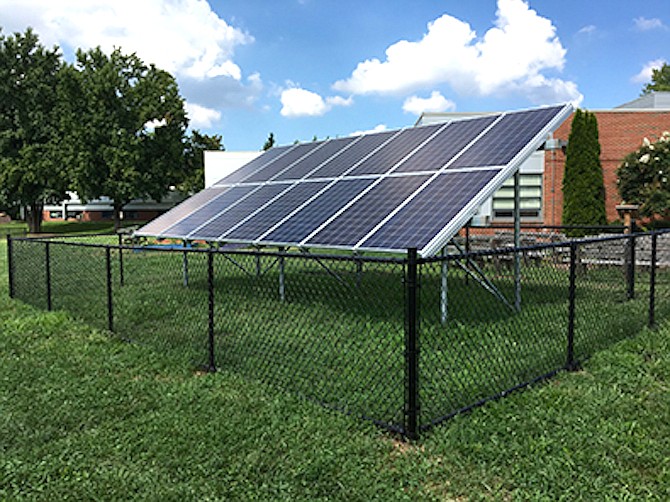 After Fairfax County's June 2019 release of a request for proposals for roof-mounted and canopy/carport-mounted solar installations at 113 sites, and following its evaluation of the proposals and negotiations, County officials announced, on Dec. 10, contracts with multiple solar power purchase agreement service providers.

The County awarded contracts to three teams of solar providers. They are Sigora Solar/Standard Solar, BrightSuite, a subsidiary of Dominion Energy, /Sun Tribe Solar, and Ipsun Solar/SunLight General Capital, according to county officials. The contracts allow for the installation of solar photovoltaic arrays at Fairfax County government, school and park sites, and provide the potential for both substantial cost avoidance and environmental benefits over time.

"Fairfax County is excited to take a major step toward a more sustainable energy future," said Bryan Hill, Fairfax County Executive. "Implementing on-site solar will hopefully lower our electricity costs as we support our Board of Supervisors adopted priorities. Fairfax County is striving to promote and encourage the use of renewable energy as we reduce our carbon footprint. We are committed to making choices around energy resources that benefit the residents of Fairfax County now and in the future," he said.

According to Fairfax County, this is the largest solar power purchase agreement initiative by a local municipality in Virginia to date. Kambiz Agazi is the director of the county office of Environmental and Energy Coordination. He said when the County asked fifteen solar companies, it included 113 potential sites as a sample to the companies showing the possible program magnitude. The County could increase the number of sites or reduce the number of sites, he said, taking into consideration the impact of tree canopies, orientation, and such on solar gain for given sites.

The United States Environmental Protection Agency defines a solar power purchase agreement as: "A financial arrangement in which a third-party developer owns, operates, and maintains the photovoltaic (PV) system and a host customer agrees to site the system on its property and purchases the system's electric output from the solar services provider for a predetermined period."

SOME OF THE KEY BENEFITS to a host customer using the agreements are, according to the Environmental Protection Agency: there are no installation, management and maintenance costs; the solar power service provider is responsible. Also, the host customer avoids other traditional barriers to the installation of on-site solar systems such as complex design and permitting processes. A third benefit is that the contracts established by Fairfax County with the solar power purchase agreement vendors are rideable, said Agazi. This means neighboring jurisdictions – cities, towns, municipalities, and the like could also take advantage of the competitive rates and reduce their greenhouse gas emissions. They would be guaranteed the same with solar photovoltaic arrays installed on their government buildings, town offices and such according to Agazi. A fourth significant benefit to the host customer is the contracts include favorable electricity rates that, in most cases, are fixed for the duration of the contracts; according to Agazi, "They will be selling us electricity at power rate lower than incumbent electric Dominion Energy, Inc. and Dominion Virginia Energy," he said. Finally, the solar power purchase arrangements can be cash flow positive for the host customer from the day the system is commissioned. According to Fairfax County: "This initiative could potentially yield over $60 million in electricity cost avoidance over the terms of the contracts." Agazi said the term length is 25 years.

While cost avoidance is important, solar power purchase agreement contracts offer significant environmental benefits as well. "Over the contracts' terms, approximately 1.73 million megawatt-hours of clean, renewable energy could potentially be delivered to Fairfax County facilities – an amount roughly equivalent to the electricity used by 213,680 homes in a single year. In terms of greenhouse gas reductions, the contracts have the potential to avoid the emission of more than 1.2 million metric tons of carbon dioxide equivalent or an amount comparable to the emissions of 260,155 passenger vehicles over the course of one year," according to the County.

IN RETURN, the solar services provider or another party acquires valuable financial benefits, such as tax credits and income generated from the sale of electricity, according to the Environmental Protection Agency.

"We're excited to be partnering with the County in a movement that's good for our students, families, and our environment," said Fairfax County Public Schools Superintendent Scott S. Brabrand. "Lower energy costs through solar power purchase agreements will enable FCPS to save millions of dollars while freeing up additional funds for classroom investments. We look forward to working with the County to expand this initiative to as many FCPS schools and facilities as possible. Our solar investment will also become an amazing learning lab for our students to reinforce the value and sustainability of solar energy," said Brabrand.

According to Fairfax County officials: "This initiative is one piece of a larger set of strategies and actions Fairfax County is undertaking to address energy and climate-related issues. With the advent of the newly established Office of Environmental and Energy Coordination (OEEC), the County is placing a renewed and concerted focus on energy use both in county facilities and in homes and businesses. The OEEC is principally responsible for the Community-wide Energy and Climate Action Plan and will engage county residents and stakeholders to devise a plan to reduce greenhouse gas emissions in the coming year."