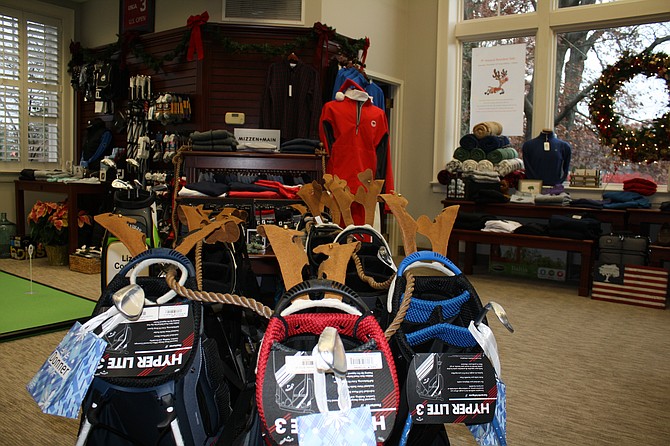 The $1 million Springfield Golf and Country Club modifications finished up just in time for the holiday season as the new look, brightened rooms, new

The new bar top and lighting adds to the welcoming atmosphere.

lighting and furniture came just in time for the coming holiday parties, galas and celebrations for members and the surrounding community at this time of year.

“The response has been overwhelming,” said Dawn Siebenhaar, the membership director.

The work started last year, modernizing the look and moving away from the traditional country club look. Upgrades included a new chandelier in the main ballroom, a new bar top and lighting in the grill, lighter paint shades, new carpet and upgraded seating in several of the existing rooms.

In the bar for example, there are new glass globe lights above a new marble bar, and they did away with the booths so the tables can be inviting, possibly enhancing member meet-ups. “We took the bulkiness out of the room,” said Bassam Medawar, the general manager. “The booths were very confining,” added Siebenhaar. The bar now has multiple flat screen televisions that work well on Sunday afternoon football days.

In the restaurant, the menu is shifting with the seasons, and they feature a traditional crab cake meal that is a member favorite, as well as the “Springfield Dip,” a warm dish that is “perfect for this time of year,” said s Siebenhaar.

The paint and furniture upgrades enhances a lighter feel to the interior.

On the porch, the furniture was updated and heaters installed so members can enjoy the outdoors throughout the colder seasons.

In the pro shop, the in-house pro, Liz Cooper, was awarded this year with the National Player Development award for the PGA, and noted for her programs such as “Wine, women and wedges,” and “Invite Her,” for newcomers. In September, the club is sponsoring the “Legends Tour,” for the Ladies Pro Golf Association.

A new, on-line tee time system was part of the renovations and has a feature so members can see other members that are playing so they can join them or meet afterwards. “They don’t have to wait for the pro shop to open,” said Siebenhaar.