Design and colors consistent with the need for new. 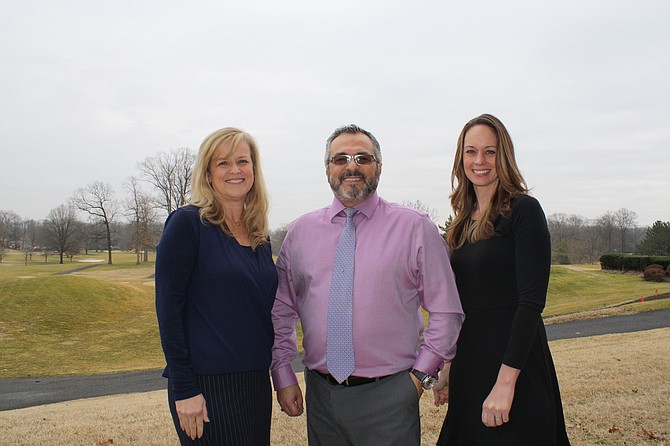 The Springfield Country Club team of Bassam Medawar, GM, middle and Dawn Siebenhaar, left, and Jennifer Kazmi have their finger on the pulse of the interior renovation at the clubhouse. Photo by Mike Salmon.

The classic dark wood look of the Springfield Country Club is on its way out soon, as the club undergoes an interior renovation to keep up with the

For the bathrooms, it all starts with new plumbing.

times and cater to new clientele on the horizon.

General Manager Bassam B. Medawar looks at one of the ballrooms underway.

“Bringing us more into the times,” said General Manager Bassam B. Medawar. The wood paneling had a “very masculine look, and we’re going away from that,” he said.

“This is more of a facelift,” added Jennifer Kasmi, the director of catering and special events.

Inside the front door, the floors are all covered with paper and plastic drop clothes, the room on the left is void of all furniture and the front desk area on the right is being refurbished. There are ladders scattered around in various spots and the private dining space looking out on the 18th green is empty as well, the fireplace turned off. The new paint is a color called “Revere Pewter,” a light grey in appearance.

Along with the interior work, the back porch is getting updated as well, and they are putting in a few heaters to keep this area popular in the late fall. “We want to extend the outside season,” said Medawar.

The club is still open and the restaurant operations are taking place in the second floor grill, where board member Robert McNamara was having a lunch meeting. The new chairs in the boardroom are up to date, and McNamara explained the design at a recent board meeting.

“They did understand that this is the trend,” he said. McNamara lives in Burke and has been a member at the club since 1996.

Nearly 20 years ago, the old club house was demolished and they built an entirely new building that looks less like a school than the original

The bar will get a new surface as well as designer lighting overhead.

structure. Reston resident Karen Altschuler at CFO, Inc. did the original interior design work, and now she is back for the $1 million renovation as well.

Aside from the work at the clubhouse, Springfield Country Club is installing a new system where members can make tee times with an app as well as dinner reservations. On certain days during the week, they have adopted a golf system called “The Challenge,” where the tee is temporarily relocated depending on the golfers level of play so there is less pressure on the beginners. “We’re trying to keep the focus on the interpersonal connections,” said Dawn Siebenhaar, the membership director.

Even though it’s a private club, they have done some events with area clubs and schools like class reunions and West Springfield High School’s end year teacher luncheons, as well as events for the West Springfield Rotary Club, the Greater Springfield Chamber of Commerce and the Springfield Women’s Connection, to name a few.

Last June when the Washington Capitals hockey team was in the Stanley Cup, the club brought in a big television screen and set it up near one of the tees so everyone on the back deck could watch the game. At one point, Alex Ovechkin was playing golf and “had his first hole in one at this golf course,” said Kazmi. The renovation is scheduled to be completed in April, and on April 30 this spring, they are hosting the U.S. Open Women’s Qualifiers.