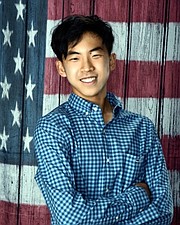 Vienna resident Alex Chung, a senior at Thomas Jefferson High School for Science and Technology, is one of 13 contestants who has qualified to compete for $10,000 in the 2020 Who Wants to Be a Mathematician Championship featuring top math students from the US, Canada, and the UK. This is the second year in a row that Alex has qualified for the championship.

The contest will be held as part of the Joint Mathematics Meetings — the largest annual gathering of mathematicians worldwide — in Denver, Colo. on Jan. 18 and will be webcast live at noon Eastern at https://livestream.com/psav/wwtbam2020.

Alex is a leading member and captain of his three-time state championship tennis team, and says he "cannot live without playing sports, watching sports, and reading books about sports."

Alex Chung was one of the top scorers on the 2020 Who Wants to Be a Mathematician Championship online qualifying test with questions on algebra, geometry, trigonometry, and probability, which was administered by high school math teachers in the US, Canada, and the UK using Möbius, a product of DigitalEd.

This is the ten-year anniversary of the Who Wants to Be a Mathematician Championship contest and the third international version. The AMS has been doing regional contests at universities and science centers from Boston to Hawaii since 2001. In the contest’s history, nearly 1,000 students have won over $600,000 in cash and prizes and have been cheered on by over 20,000 classmates and mathematicians.