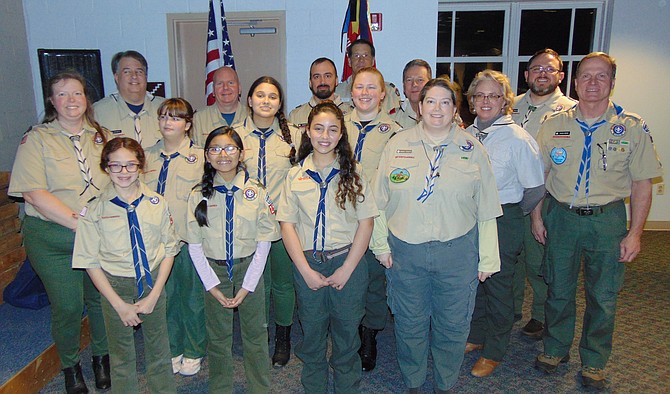 The girls of Troop 893 with their Scout leaders. Photo by Steve Hibbard. 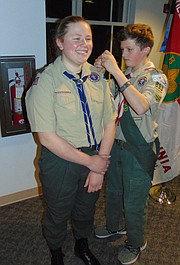 Brian Staton puts the Scouting handkerchief on his sister Megan.

According to Michael Adere, chartered organization representative with Troop 893: “This is pretty exciting because girls have been involved in the Venture Crew for 20 years, and a year ago they were able to integrate with the Pack, which is Cub Scouts. Today is actually the official launch nationwide of girls’ troops in the Scouts BSA. And these girls, like their boy counterparts in the boy troops, will be able to work up through the ranks, earn merit badges, and they will follow the same what we call ‘Trail to Eagle’ that the boys do currently.”

He continued: “It’s exciting for us because they’ve talked about this for a few years and now we’re actually having it happen. That’s what tonight’s celebration launch is all about.”

He added that the girls’ troop will be a totally separate troop from the boys but they will share some resources at the adult level; they will interact with each other and join in some activities like campouts.

How big of a milestone is this? Adere said: “It’s actually huge because we’ve had girls in the Venture Crew, which is 14-21, for about 20 years. But we’ve never had girls in the Pack level, which is Cub Scouts ages 5-11, or the Boy Scout troop level, ages 11-17 up until this time.”

He continued: “This is something we’ve been looking toward for several years. It is a big milestone. Because for the first time, girls will actually be able to join a girls’ troop, similar to a boys’ troop, and be able to earn the same merit badges, and more importantly, the rank advancements, the same as the boys -- ultimately culminating in the Eagle Scout rank, which is the highest rank in Boy Scouts.”

According to Paul Taylor, committee chair for the Boys Troop and Girls Troop: “This is a pretty big deal. I like that we can now welcome all youth to all levels of our Scouting programs. We have four different levels and they now can be involved at every level. So, we’ve had co-ed in Venturing Crew for a long time, but what I really like is that now girls can join both in the Pack level, when they’re in elementary school and now their middle and high school can be in a troop, and earn Eagle, which is a huge deal.”

Taylor added: “This is something that’s been long in coming, it’s been worldwide accepted and we are now stepping into the same arena as the rest of the world and having girls in every aspect of Scouting, so it’s a huge day in the history of Scouting. It’s a pretty big deal. Things like this don’t happen very often.”

New member Christina Alvarez, 14, of Centreville attends ninth grade at Chantilly High School. “Today, I’m looking forward to joining Boy Scouts probably because I think it will be a lot of fun and my goal is to get my Eagle (rank). My plan for the patches and ranks is to ask my parents to help me because my dad is the Troop leader for 1995 (at Deer Park Elementary), which is a different troop and my mom’s the Advancement Chair for that troop so she has connections all over Boy Scouts…. I’m probably most looking forward to making friends and meeting new people and becoming eventually an Eagle, hopefully,” she said.

Brian Staton, 13, of Centreville, who attends eighth-grade at Rocky Run Middle School, said: “I feel like it’s a good thing that they’re (girls are) getting a chance to do the same activities that we do, but I think it’s also good that they’re getting their own separate troop. So, I feel good about it. I feel like it’s a good idea and it’s nice to finally have this happen.”

New member Rowan Causley, 10, of Centreville is a fifth-grader at Virginia Run Elementary, who added: “I’m very excited and a little nervous at the same time,” she said. “I play baseball with boys so I’m kind of used to it. I’m very looking forward to doing all this stuff. My dad was a Boy Scout and I’ve seen all of his outfits and stuff so it looks very cool.”