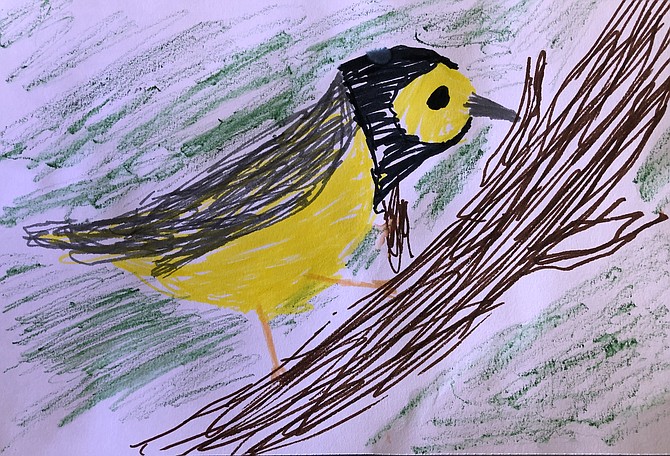 Second and third grade classes and teachers at Monticello Park in October 2018.

Tiny fingers point to a red spot in the trees. "I think it's a cardinal." The second and third grade classes at Alexandria Country Day School (ACDS) were walking through Monticello Park in October 2018 with local birder Bill Young as part of their school curriculum. "It was windy that day and we didn't see many birds."

Young said he introduced himself and asked each student to identify themselves and tell him their favorite bird. "There were a lot of cardinals and blue jays but I remember one said 'a Mississippi kite.'" Young said he is hoping to invite the students back on the spur of the moment in May when the warblers generally migrate through the park in large numbers. "But you can't set a date because it might be raining or the winds could be off. So I'm hoping to be able to call at the last minute and have the students show up." Second grade teacher Sarah Shannon says, "We'll be ready to pack and go."

This is part of a one-year partnership grant from the City of Alexandria Community Matching Fund. Elizabeth Lockwood, ACDS library media specialist and service learning coordinator in charge of managing the activities associated with the grant said, "What we wanted to do is to have students who study nature and related topics to use the park as part of the curriculum."

ACDS applied for the partnership grant at the end of last year and received the $10,000 matching grant at the end of the summer. The city is providing $5,000 and ACDS $4,000 and 40 volunteer hours. Lockwood says the grant was for community organizations that want to make improvements in city parks. In this case Monticello Park is on Beverly Street in ACDS's own neighborhood. Second grader Payton Rizzieri says she lives in the neighborhood and “sometimes me and mom take pictures but I only got one good one of a warbler.”

Lockwood explains, “Part of the grant will be used to replace the "dilapidated picnic table and bench currently in the park." The grant will also be used to create a new interpretative sign to be placed close to the bridge in the park. She said the students have done research, with the second and third grades focusing on birds and the seventh and eighth focusing on plants. The bird research will focus on bird migration in general, why Monticello Park is an oasis, and on warblers specifically.

Lockwood says, "We have met with a nature artist, so we will have some original student art."

Seventh grade Rylie Reid's illustration of a Mountain Laurel Tree with different types of birds inhabiting the three layers of the tree canopy will be used as part of the interpretative signage. Reid says moving forward they will analyze more of the features and see how the slight subtleties all work together in the park.

Lockwood said, "We have provided the research and content and now it is in the hands of the city." The plan is to install the sign in the spring, "and we hope it is in place before the warblers are back."

Shannon says, “It has been very powerful for the second graders to see something take place that they have created. They were proud because they had all of these ideas they could tell people and the people listened to them."

The plan for the seventh grade project on vegetation will include a 20x20 meter research plot near the front of the park to keep track of changes in vegetation over time. According to Rod Simmons, Natural resource manager/plant ecologist for the City of Alexandria, there will be no damage to the park but the students will record what plants wax and wane and observe over time. "Now that the Swedish Ivy has been removed after decades of growth we have the opportunity to actually see what is coming back."

Simmons and 7th-8th grade science teacher Chris Ros walked through the park with the 7th-8th students on Oct. 18, 2018 at the beginning of the project to have a session on the geology, topography and characteristic species of vegetation. Simmons says the park is naturally divided into two halves with the NW side of the stream old-age Mesic Mixed Hardwood Forest and the E-SE side steep slope old-age Oak-Heath and Oak-Witch Hazel Forest. Ros says there is a tree at Monticello, the Mountain Laurel, that is hundreds of years old.

Simmons says, "Chris took one side of the park and I took the other. The kids were really engaged and got it down. I could tell because when I saw the interpretative sign, they got it pat. You know when it's a nice day and you're out. Well, it can be kind of dry for a kid." And Ros adds, "7th-8th graders aren't exactly quiet." Simmons remembers taking the geology question of one student back to the Cretaceous Period, back to dinosaurs.

Ros says, "For me the park is a learning environment." He says they have spent a lot of time at Monticello with different learning experiences like the 8th grade topography project looking at erosion and weathering. He thinks of it as an outdoor classroom. "The reason I love the plot so much is you can look at the changes that can take place over time, what happens when the tree canopy opens up." He envisions having an alumni event down the road where students can come back and see the changes that have taken place in the plot.

Young commented that it is good to have young people interested in birds because if you look around at the birding population today, it is mostly older people. Simmons says, “If you don't get them by 5th grade, they aren't going to appreciate it.”

Second grader Elijah Schneider says, "Looking at birds is sort of fun, but I wouldn't want to stand out there all day." But he did like listening to the birdcalls and he noticed a lot of them made high-pitched sounds and seemed to be communicating with each other.

Second grader Caleb Banks says, “We want to make the park a better place for people who take road trips and stop at the park, with signs so people can learn." He adds the signs are in English and Spanish "because we wanted it to be diverse."

Eighth grader Evelyn Tucker, who was part of the grant writing team for the park proposal last year, says, "It's a community-centered park. That's why what we are doing is so important."

For more information on Monticello Park check MPNature.com which was created by Bill Young and Ashley Bradford as a citizen scientist project to help people learn about the nature at Monticello Park. Young says among the features it includes are photos, daily bird checklists, natural history essays and a virtual tour of the park. Young says, “We believe that people are not likely to want to save the environment unless they love it and they are not likely to love it unless they understand it.”