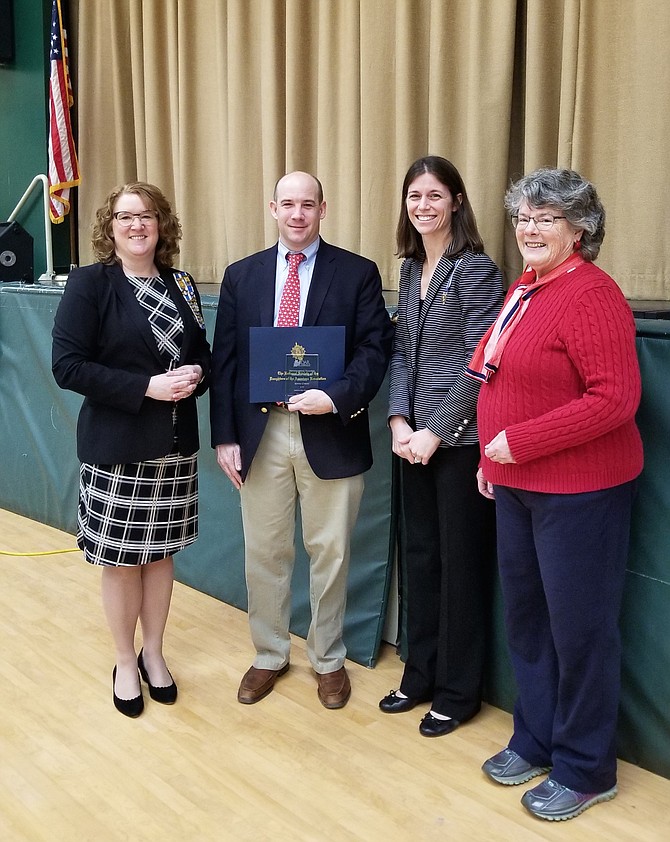 During a school assembly at Saint Luke School on Feb. 19, 2019, members of the McLean-based Freedom Hill Chapter of the Daughters of the American Revolution (DAR) presented Kevin Cyron with an Outstanding Teacher of American History Award. Mr. Cyron was elected the winner of this award based on his exceptional work and achievement as a teacher. The chapter also endorsed Mr. Cyron in the State contest of the Virginia DAR.

The mission of the DAR is to promote historic preservation, education, and patriotism. As part of its emphasis on education, the Outstanding Teacher of American History contest honors notable full-time teachers who demonstrate excellence in readily sharing an insightful knowledge of American history, being committed to their students, fostering a spirit of patriotism and loyal support of our country, relating history to modern life and events, and requiring high academic standards from their students.

Mr. Cyron is a social studies teacher at Saint Luke School in McLean since 2011 and also serves as the middle school coordinator between the academic team, administration and parents. Mr. Cyron is a skillful and knowledgeable teacher who challenges his students to think critically about the world and the relevance of historical perspective. He has a wealth of knowledge about American history and shares his enthusiasm on a daily basis with his students. He graduated from Gonzaga College High School and earned both a Bachelor of Arts in Communication and a Master of Arts, Secondary Education – Social Studies from Marymount University in Arlington. He also holds a Master of Arts in European Studies and Sociology, as well as a Master of Arts in Statecraft and National Security, National Security Defense, Public Diplomacy, and Political Warfare Concentration.

During the assembly, school principal Mr. Louis Silvano introduced Chapter Regent Beth VanDoren Boswell, Chapter Historian Maureen Jenkins, and Chapter Registrar Wendy Stark. Mrs. Jenkins spoke about Mr. Cyron’s dedication to education and the quality of the learning demonstrated by his students. Mrs. Stark noted the way in which Mr. Cyron supports his students and how he guides them to appreciate the significance of events in American history. Mrs. Boswell thanked Mr. Cyron for fostering a love of American history in those he teaches and presented him with the Outstanding Teacher of American History Award.