‘It’s Our Time to Shine!’ in McLean
Votes

‘It’s Our Time to Shine!’ in McLean 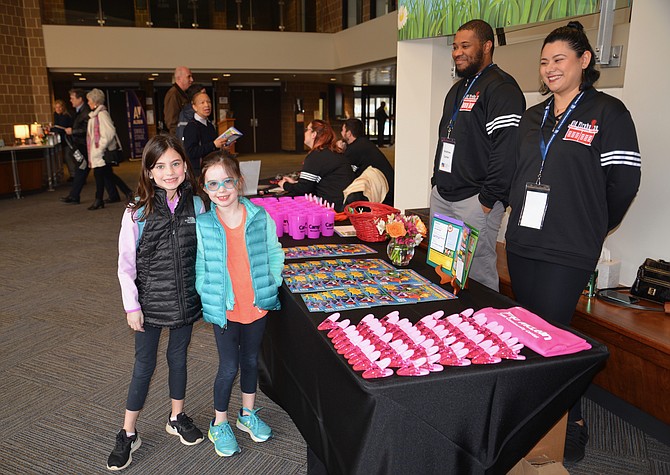 Kendyl and Katelyn, sisters from Falls Church, are ready to start their tour of the newly renovated McLean Community Center at the facility’s Open House on Jan. 5. Photo by Andrea Worker.

Deanna and Charles Martin are long-time McLean residents and supporters of the McLean Community Center. At the Open House, they check out information with MCC Special Event Manager Catherine Nesbitt about a “trip to Spain” – or more accurately, a bus ride in to D.C., for a fabulous night of food, wine, and Flamenco entertainment, part of the MCC’s “Passport Series.” 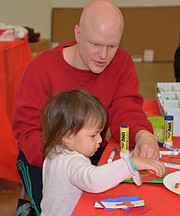 It’s recess time for Fairfax County School Board member Ryan McElveen who took the time out to enjoy an arts and craft program with his two-year-old daughter Sierra at the McLean Community Center Open House. 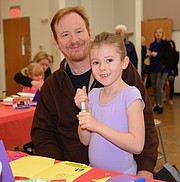 John Reynolds and daughter Cora, of McLean, enjoyed the arts project space at the Open House. Cora, 6½, will also be continuing her dance lessons at the MCC. She was dressed and ready for the dance demo.

On Saturday, Jan. 5, the doors of the McLean Community Center (MCC) were opened wide for an Open House. Local residents and visitors from throughout the county were introduced to the new and improved “Center of It All.”

It was in Spring of 2017 that the MCC went dark and began its transformation – one that starts even outside its walls with “parking lot lighting that works” noted Center Executive Director George Sachs at the ribbon-cutting a month ago, “and lights along the outdoor pathways.”

Another outdoors improvement was the new stormwater management and filtration systems added underneath the parking lot – systems that were well-tested and passed with flying colors during the record-breaking rainfalls of late 2018.

Most visitors familiar with the original facilities remarked on the lobby area as the place where change was most noticeable. That space was opened up dramatically. Where arriving guests were once faced by a large wall, floor-to-ceiling windows now look out upon a glass-enclosed interior courtyard and flood the space with light instead.

THE COURTYARD, complete with inviting greenery and benches, was made possible by a generous donation from McLean residents and MCC supporters Roberto and Gloria Maria Federigan. A brand new welcome and registration desk now sits front and center where visitors can get all the latest information on MCC happenings.

All told, about 7,700 square feet of space was added, while another 33,000-plus square feet were improved upon. Sachs was pleased to say that these improvements would allow the MCC to offer even more programs to its almost dizzying inventory of activities, and to expand the number of participants that many of the events can accommodate.

It’s a testament to the administration and staff of the MCC that during the long renovation process they were able to continue offering their usual array of classes, exhibits, camps and other regular activities using the satellite facilities at the Old Firehouse Center and a number of other temporary locations.

Their organizational skills were on display at the Open House, as they guided visitors through the new spaces with “passports” in hand. A stamp in that “book” for each area visited or activity participated in afforded each a chance to win a prize.

Staff were handing out swag bags at the entrance to the expanded, light-filled lobby, to collect the many goodies and giveaways to be had as those visitors wandered the new classroom spaces and activity areas.

In the entry atrium, “5-almost-6-years-old” Katelyn and her sister, 8-year-old Kendyl from Falls Church, were just starting their Open House adventure. Kendyl was looking forward to joining in the Hip Hop demo class since she will be a class member in the new facilities. In the lobby, they had stopped by the Old Firehouse and Camp McLean information booths to collect a few goodies for their swag bag and get some information from the Old Firehouse staff – along with that coveted “passport” stamp.

Mike Fisher, the Old Firehouse Center general manager was on hand to talk about the facility and its offerings, and his passion for the place, the people and community are easy to see.

Started as somewhere safe for youngsters and teens to meet for “recreation and personal development” particularly after school and during the summer, Fisher says “It’s our mission to utilize the Old Firehouse for that purpose and more, to its fullest ability.”

Morning classes and events are now scheduled for adults, and the Old Firehouse has partnered with a group to offer programs for youngsters with differing abilities.

Elsewhere, dance and fitness demos were taking place in the Shelp Studios, while the Stedman Room offered previews of upcoming youth events, and the Hampton Room was filled with children – of all ages – taking part in an “Open Games Display.”

The Maffit Room attracted a lot of attention with its Stem-related class previews. Long-time MCC supporter and McLean resident Karl von Schriltz was shepherding the children throughout the activity spots, but stopped for a bit of his own fun with an encounter with static electricity, generated by the crank of a wheel.

The Community Hall was the scene of the BeFit McLean Health Fair, courtesy of a roomful of booths manned by staff from the Virginia Hospital Center.

Screening for cholesterol levels, blood pressure, body composition, vision, and even a Dermascan machine to look at the effects of sun damage on the skin, had open house-goers lining up.

The Virginia Hospital Center gang also had booths with information on brain health, combating stress and exercises that were easy to do at home.

Hospital center staffer Mary Ghali was in charge of one interactive demonstration that drew a crowd with its “drinking goggles” challenge. The goggles are designed to simulate visual impairment when one is over the acceptable limit for blood alcohol when driving. One after another, participants donned the specs and then attempted to “walk the line” – two strips of blue painter’s tape laid on the floor in straight lines. The results were the same, no matter who tried, as Paul Liu, a first-time visitor to the MCC, discovered when he gave it a go. With the blurry glasses, no one made it past the first three steps before veering off in one direction or the other.

THE FIT FAIR also included freebie healthy lunch offerings, while MCC Special Event Manager Catherine Nesbitt talked to neighbors like Deanna and Charles Martin, who live within walking distance of the Center, about just a few of the possible adventures available through the center. Coming up in February is a “trip to Spain” – a bus ride into D.C. for dinner and a Flamenco Show – all part of the center’s “Passport Series.”

The visual arts were also on display at the open house. Art works by teachers and students were exhibited in the DuVal Studio, while young artists were able to give free rein to their creative talents with construction paper, glue and some other resources as part of the demonstration of the McLean Project for the Arts.

That’s where Fairfax County School Board member-at-large Ryan McElveen was found, engrossed in creating colorful cards decorated with geometric shapes with his two-year-old daughter Sierra. Miss Sierra was more than happy to share her work and invite passers-by (like a Connection reporter) to join in the fun. McElveen recently announced he is a candidate for chairman of the Fairfax County Board of Supervisors.

Cora Reynolds of McLean, 6½ years old and dressed for the dance demo, took a break from the more physical action to share a table with the McElveens while she and her dad John made an art project of their own. Cora will be continuing her dance lessons at the MCC.

If one took the “tour” in order, the last stop along the way would be a sneak preview of the Alden theatre. From Shakespeare to Gilbert and Sullivan, and from showings of foreign films to concerts, and speakers’ series and technical theatre training classes, the Alden’s season has something for everyone.

Now. Time to go and get your own brochures and flyers and check out the action at the new, greatly improved and ready for you McLean Community Center and the Old Firehouse, too. Start at their website www.mcleancenter.org. You don’t want to miss a thing.