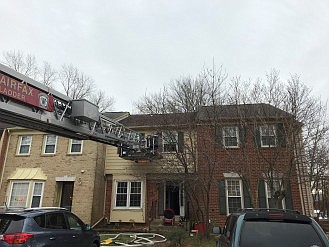 The damages as a result of the fire were estimated to be $125,000. Photo courtesy of Fairfax County Fire and Rescue Department

On Monday, Jan. 7, at 11:45 a.m., units from Fairfax County Fire and Rescue and the City of Fairfax Fire Department responded to a report of a townhouse fire in the 9700 block of High Water Court in the Burke area of Fairfax County.

Units arrived on scene of a middle-unit townhouse to find smoke coming from the front of the house. Crews located a fire in the basement. As units worked to extinguish the fire, two firefighters conducted search and rescue operations on the first floor. During their search both firefighters partially fell through a hole in the floor. They quickly pulled themselves out of the hole and exited the home uninjured. There were no reports of civilian or firefighter injuries.

A neighbor smelled smoke and called 9-1-1. Smoke alarms were present in the home and sounded.

Two adults and one infant were displaced because of the fire. Red Cross assistance was offered and accepted. The damages as a result of the fire were estimated to be $125,000.