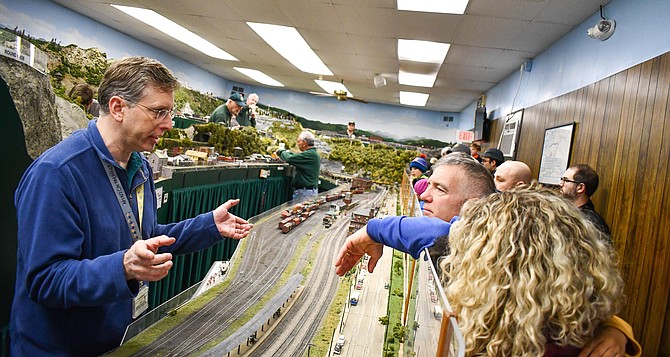 Jim Mullison and his son William, 10, of Lorton, operate the electric trains behind the scenes.

Ezra Cantor, 3, of Springfield comes with his father once a month and stays for hours to see the trains. 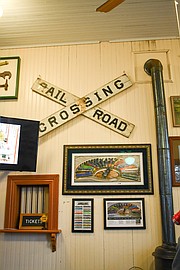 The Vienna Train Depot used to be segregated; a missing piece in the ceiling’s molding indicates that there was a wall separating whites and blacks.

The impending snow storm did not keep anyone indoors on a chilly Saturday. The old train depot in Vienna was teeming with families ready to see the Northern Virginia Model Railroaders model train’s first open house of the season. Kids pressed their faces up against the glass to see the trains streaming by while Bill Mims, a member of The Northern Virginia Model Railroaders, talked about the Western North Carolina Railroad, a real train that ran about 130 miles from the lake filled town of Salisbury to the mountainous Asheville in the 1950s. The club and its members not only provide information on the North Carolina Railroad but on our beloved Washington and Old Dominion and the train depot which was a real train station.

“The last passenger train was May of 1951. From there it kind of hobbled along until the middle 60s where they last used the rails to haul materials out to Dulles Airport,” said Sandy Robeck, the president of NVMR. The Washington and Old Dominion Railroad ran from 1912-1968; Dulles Airport was completed in 1962.

The original intent of the W&OD Railroad was to run all the way to the coal fields of West Virginia, but during its construction during the Civil War, the railroad ran out of money and had to stop its tracks in Purcellville.

“The first open house was February 1978,” said Robeck. “The club signed a lease in 1976.” The club has been active for 65 years and has been showing model trains for 40 years at the Vienna Train Depot. In addition to their monthly open houses, the depot is open during popular Vienna festivities such as Viva! Vienna and the Holiday Stroll. The complete schedule can be seen at nvmr.org.