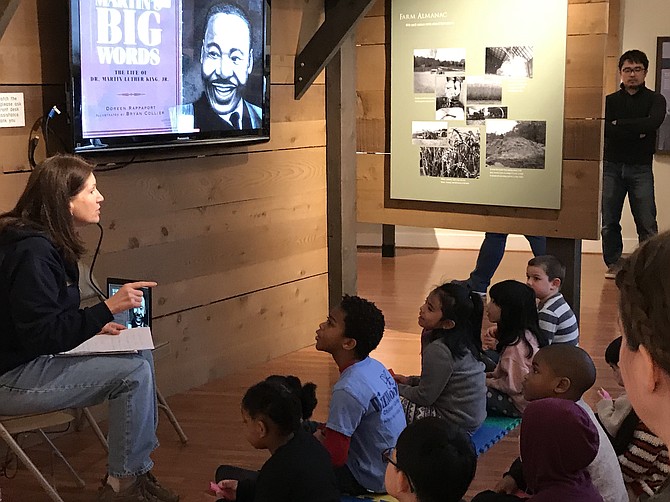 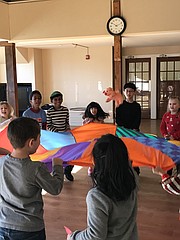 Parachute games draw squeals of laughter as children at the Martin Luther King Jr. Day of Service at Frying Pan Farm Park work in the spirit of cooperation and team-building, bouncing a stuffed animal up and off the cloth.

The hour-long program proved to be very popular. Children and parents poured into the Visitors Center, many bringing a new toy to donate to needy children. Madeline Herman, Frying Pan Farm Park Recreation Programmer, split the program into three segments.

Next, the children played team-building games. "Working together helps us to solve bigger problems," said Herman. Parachute games drew squeals of laughter as the children worked cooperatively in the team-building exercise to bounce a stuffed animal up and off the cloth and create a synchronized "wave” to move the animal around the perimeter. "You are an important part of the group when you work together," said instructor Claire Thomas.

At the final station, Rayyan Tall, 11 of Fairfax, momentarily paused his work at the watercolor art donation station. He sat beside Miranda Thomas, 4, to look over the book about Martin Luther King Jr. Johann Tiilikainen, 6 of Centreville, painted a watercolor picture. Beside her sat William J. Gock, 8 of Fairfax who filled in colors for his rainbow. Gock said, "I'm painting it because it makes me happy and I think it will make other people happy too."

“(The) watercolor station will allow them to create art to donate (as a service project) to the residents at the Fairfax Nursing and Rehabilitation Center," said Herman.