Autonomous Vehicles Finding the Way on Base
Votes

Autonomous Vehicles Finding the Way on Base

Driverless shuttles look futuristic as they navigate a route around parade field. 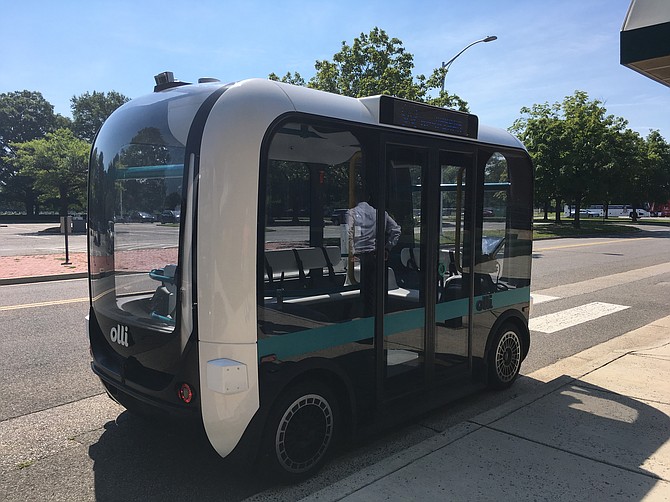 The autonomous Olli at Fort Myer. Photo by Mike Salmon.

When “Olli,” pulled out on the road of Fort Myer, going for a loop around the parade field, there was no engine noise and no driver, but it made all 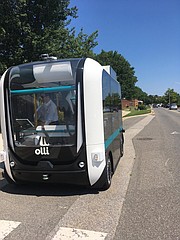 The Olli has no driver.

the stops, and smoothly rounded corners. Olli is an autonomous vehicle with no driver, and possibly a way of the future.

The Olli Autonomous Vehicle Pilot Program is on Joint Base Myer-Henderson Hall from June 19- Sept. 19, testing out the concept with the U.S. Army Engineer Research and Development Center. Joint Base Myer-Henderson Hall was chosen for the pilot program after going up against several colleges and municipalities that entered the “Olli Fleet Challenge,” going up against the University of Maryland, George Mason University and the City of Frederick, Md., among others that entered. There are additional fleet challenges in progress in Atlanta, Georgia and Southern California. It is one of two autonomous vehicle efforts funded through a Congressional Program of Interest for smart bases.

Local Motors built the Olli and they are one of several companies building similar vehicles. “We are currently on the University of Buffalo,” said Rasheed Walford, Local Motors district sales representative on the east coast. Joint Base Myer-Henderson Hall was “the best deployment for this region,” Walford said.

For the next few weeks, Olli will travel an assigned route on the Fort Myer streets surrounding the parade field, so everyone on the base can test it out before it goes live in late July. Then, for another month, it will make stops at office buildings and other Joint Base Myer-Henderson Hall locations, alleviating the need for cars to some extent.

Although the Olli has no driver’s seat, no steering wheel and no driver, there is a steward on board to run the computer and “to alleviate the mind of the passenger,” Walford said.

The Virginia Department of Transportation has its sights on autonomous vehicles as well and helped initially facilitate the Olli at Fort Myer, even though VDOT does not help with the roads and things on the base. VDOT had discussions with the base about an autonomous vehicle plan, and the ultimate goal was for the employees at the base to take transit to the base and catch Olli from there. It’s still a goal, but they aren’t there yet.

“We’re helping them to think about how they want to evaluate the pilot,” said Cathy McGhee, director of innovation and research for the Office of the Virginia Secretary of Transportation.

There is a program in Fairfax County between the Dunn Loring Metro station and the Mosaic District south of Tysons Corner. The county has not determined if they’ll use an Olli or another type of autonomous vehicle. “Lots of questions remain,” McGhee said.

There are levels of autonomous vehicles and Olli on Fort Myer is a level four vehicle because there is an attendant, but the technology is going to a level five with no driver or attendant.

Virginia Del. Glenn Davis (R-84) is supportive of this technology and is actively pursuing legislation in that direction. “It’s a great opportunity for mass transit in communities,” he said. “More populated the area, the move beneficial these vehicles will be,” Davis said. A car with cruise control, for example, is considered a level two vehicle since there is a certain level of automation used when driving.

There is a current version of car made by Audi that uses a certain level of autonomy so the driver at a stop light will know how long the light will be and when it turns green, there is a signal in the car. That way, those reading email at the light will not sit there during a green light phase, which frequently happens and is an interruption in the flow of traffic and the performance of the traffic signal. When the light is green, “that delay is getting longer,” she said, and one of their concerns at the VDOT research center.