Lighting Up the Night in Alexandria
Votes

Lighting Up the Night in Alexandria 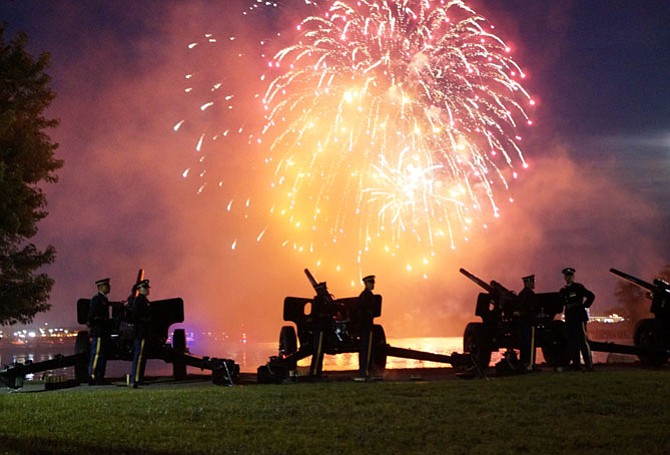 “We love doing this. For our guys, this is a big deal.” — “Old Guard” Battalion Commander Lt. Col. Jody Shouse

Thousands stand for the playing of the National Anthem by the Alexandria Symphony Orchestra July 8 in Oronoco Bay Park.

The skies over the Potomac River lit up with fireworks and cannon fire July 8 as the City of Alexandria celebrated its 268th birthday at Oronoco Bay Park.

“We love doing this,” said Battalion Commander Lt. Col Jody Shouse of the platoon also known as The Old Guard. “For our guys, this is a big deal.”

The main attraction was the ASO, led by guest conductor Jon Kalbfleisch, and its performance of the “1812 Overture” complete with cannon fire over the Potomac River.

“This is our second year providing the cannon support,” Shouse said. “For decades the Marines had done it but were not able to last year so we stepped in.”

The Old Guard was represented by 14 platoon members in ceremonial uniforms, who mingled with the crowds during the day and enjoyed a lunch sponsored by the Old Dominion Boat Club.

“We love being here,” Shouse added. “The guys love talking to the crowds, intermingling and just being a part of this great celebration. We hope to see everyone again next year.”