Patriotism, BBQs & Basking in the Hot Sun at Lake Fairfax 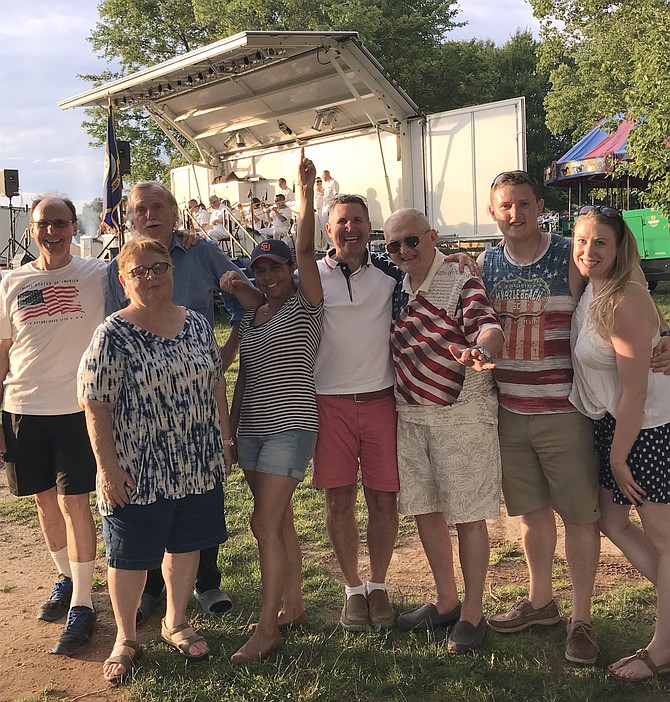 After Modern Vintage performed at the Lake Fairfax Park Independence Day Celebration, its members and their families and friends donned patriotic shirts, and spent time together ready to listen to The U.S. Navy Band Commodores perform. Photo by Mercia Hobson. 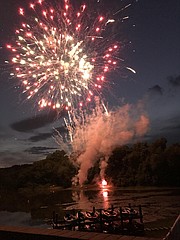 It’s not an early Independence Day Celebration at Lake Fairfax Park in Reston operated by the Fairfax County Park Authority without the time-honored fireworks display over the water. 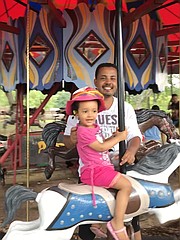 Tamerat Desh of Reston holds tight to daughter Eliena, 2 as she rides the antique carousel at Lake Fairfax Park. 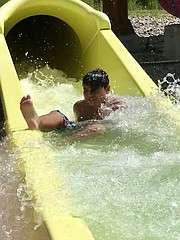 Isaiah Cruz, 10, takes a plunge off the water slide at The Water Mine Family Swimmin' Hole, one of the many activities available at the 2019 Independence Day Celebration at Lake Fairfax Park held Saturday, June 29.

If you're throwing a birthday party, throw it big and all day. Fairfax County Park Authority celebrated the nation's 143rd birthday early at Lake Fairfax Park, Saturday, June 29. Opened from dawn until after the evening's last firework fell into its lake, the 476-acre gem with boat rentals, carousel, camping, fishing and cool down at The Water Mine Family Swimmin’ Hole proved the destination for thousands of people from northwestern Fairfax County and beyond that day.

For the Seskey family of Vienna, mom Emily and daughters Abigail, 5, and Caroline, 4. the park offered too much for a single day visit. They stayed at the campgrounds. "This is our first time here. We came for boating and fishing, and tonight are the fireworks. That's the perfect plan," said Seskey.

Many other families, like the Epps of Alexandria, planned their day six months earlier making reservations in January for a picnic shelter overlooking the lake with an uninterrupted sightline to view the fireworks. The shelter guaranteed shade, a cool breeze, tables, grills and ADA accessibility. Georgia Epps and nephew Kai Oliphant Epps, 3 arranged the picnic food and condiments. "You have to call early for a gazebo," Epps said, as she remembered how another family member does so each year.

Nearby, a ride on the restored antique carousel attracted Tamerat Desh of Reston and his daughter, Eliena, 2. Although it was early in the afternoon, Desh said that they too planned to stay for the fireworks.

Off at the other end of the park, The Water Mine Family Swimmin' Hole drew thrill-seekers Canseco Santiago and his nephew Isaiah Cruz, 10. "I've never been here. My favorite is the water slide,” said Cruz as he dripped from his most recent descent filled with high-speed turns, twists and the final plunge. Behind him, the slides rose to tower heights of 3-stories, and with the allure too much, both ran off to take on the challenge again.

While many people enjoyed their day at the park, others worked there like Julianne Naquin, formerly of Herndon and now of Reston. Naquin, manager on duty at the Water Mine and lifeguard Anna Cade of Vienna carefully watched patrons go with the flow of Rattlesnake River where the current gently nudged people resting in the inflatable inner tubes along. "We do our best to keep our park safe and clean, even on busy days," said Naquin.

Outside the Water Mine, Rachel Thomson, Daniela Cacciapaglia and Tom Hetherington, all of McLean sold fruit drinks and soft serve ice cream at the vendor stand Island Refreshments. As the evening approached, Cacciapaglia also looked forward to the fireworks. "They bring out patriotism," she said.

However, it couldn't be a party without live music. A high-energy Northern Virginia band with connections to Alexandria, Modern Vintage played first followed by The U.S. Navy Band Commodores, the Navy's premier jazz ensemble.

With dusk on the horizon, families set up their lawn chairs and spread blankets on the lake's grassy bank. At precisely 9:15 as advertised, the first comet charged upward. Its light reflected on the water then exploded into a roman candle beginning a near 30-minute fireworks display and the culmination of Lake Fairfax Park Independence Day Celebration.