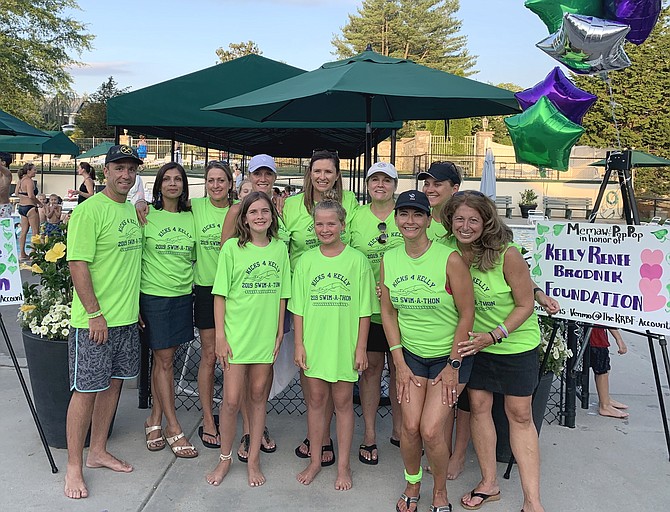 On July 10, Westwood Country Club hosted their first-ever Kicks for Kelly Swim-A-Thon, honoring their fellow teammate’s battle against osteosarcoma. Osteosarcoma is a type of bone cancer that most often affects those 25 and younger.

The event raised money towards the Kelly Renee Brodnik Foundation which allocates money towards osteosarcoma research and affordable cancer treatments.

Kelly Brodnik, the inspiration behind their organization, was diagnosed at age 13. She began to fight cancer on and off again for the next 2-and-a-half years as she went through middle and high school. Following a 9-month chemotherapy treatment, she was cleared for remission in November of 2017 but that was short lived. Just months later, doctors discovered 13 tumors along her spine and pelvis making her terminally ill. On Sept. 16, 2018, Kelly lost her battle to cancer, leaving behind her three sisters, parents and a community determined to help find a cure.

Kelly was loved by many, especially her close-knit family. Many attendees of the event including close friends and family said she had a strong admiration for her three sisters and parents.

Her sister, Erin Brodnik, said that Kelly was quite “self-assured” as she “liked to put her own spin on everything,” including fashion.

The poolside event sponsored the Westwood Club Swim team ages 5 to 18 fundraised based on donation pledges per lap. A culmination of 6,346 total laps were completed in honor of their former teammate raising more than $27,000 and counting.

Affordable cancer treatment is one of the pillars of the Kelly Renee Brodnik Foundation. Kelly’s mother, Renee Brodnik emphasized that Kelly “wanted the money to go to kids with needs.” The foundation achieves this through providing pegfilgrastim injections to children with osteosarcoma whose insurance does not cover this drug. This drug, commonly referred to as Neulasta, is intended to prevent infection following chemotherapy.

Innovative research is another goal of the foundation. Discovering alternative medicines for osteosarcoma is very important to the Kelly Renee Brodnik Foundation, so children similar to Kelly will one day not have to suffer from ceaseless chemotherapy sessions and ineffective drug prescriptions. Mrs. Brodnik emphasized that there is currently the “same treatment no matter where you go,” across the U.S., Canada and Mexico, making research all the more valuable to understanding and conquering osteosarcoma.

Megan Wallace, a close family friend of the Brodniks, encouraged fellow mothers of the Westwood swim team to help organize and host the event with her. With the dedication of the mothers and swim team, these individuals as well as the Westwood Country Club, sought to create a sense of community for the Brodniks. Prior to Kick’s for Kelly, Westwood Country Club has hosted numerous other occasions to support Kelly and her family such as blood drives.

The Vienna community continues to grasp the loss of Kelly. Nevertheless, they are beginning to transform their loss into a worthwhile cause: find a cure and help those alike in need.