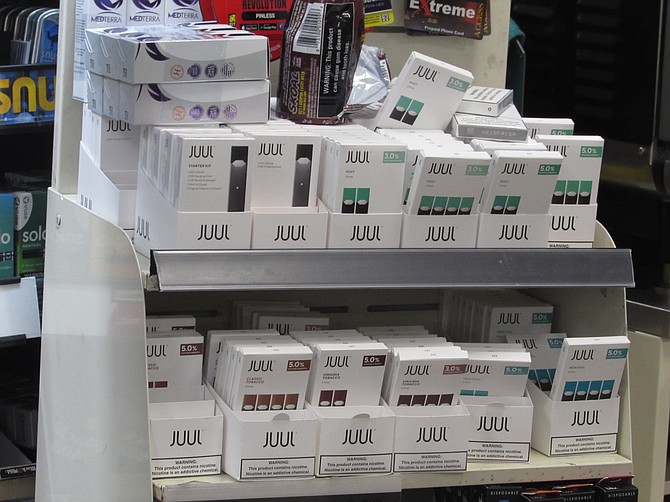 Juul Labs, Inc. accounts for more than 70 percent of the e-cigarette market. The company has drawn criticism for the heavy use of their products among underage youths. Photo by Liam Bowman/Gazette Packet

The use of electronic cigarettes among youths has emerged as one of the country’s most prominent public health concerns. Usage has grown exponentially in recent years and there are now more than three million high school and middle school students using e-cigarettes, in what lawmakers have called an “addictive epidemic.”

A new bill in the Virginia General Assembly, introduced by Sen. Adam Ebbin (D-30), would attempt to combat this issue by imposing a state tax on e-cigarettes. “Anything we can do to stop more young people from getting hooked is desirable,” said Ebbin. “Right now there’s no tax on e-cigarette products other than the sales tax. If you’re going to tax tobacco, there’s no reason you shouldn’t tax other tobacco products that have a profound health impact.”

The bill would tax e-cigarettes at a rate of 40 percent of the wholesale price and, if implemented, could potentially generate between $15 million and $20 million in annual tax revenue. The bill also includes the creation of the School Mental Health Counselors Fund and the Quit Now Virginia Fund, both of which, according to the proposal, would be funded by the revenue from the e-cigarette tax.

Ebbin introduced the e-cigarette bill during the 2019 session, where it was passed by indefinitely. The bill is currently under consideration from the Tax Preferences Joint Subcommittee, but the committee has yet to schedule any meetings for this year.

“The subcommittee would likely hold a meeting in the fall and review Senator Ebbin’s bill at that time,” said Connor Garstka, lead attorney for the Tax Preferences Joint Subcommittee.

Given that this bill could set a new precedent in e-cigarette regulation, the lobbying effort during its debate will likely be robust. “It’s going to be an epic battle,” said David Rehr, director of the Center for Business Civic Engagement at George Mason University.

Similar to how an increasing number of states, including Virginia, have increased the purchasing age of tobacco products to 21, passage of this bill could encourage other states to pass their own taxes on e-cigarettes. “[Proponents of the bill] know that if they get it in Virginia, it could spread nationwide … Whereas e-cigarette manufacturers don’t want to face 50 different taxes in 50 different states,” said Rehr.

According to the Centers for Disease Control and Prevention, e-cigarettes are now the most commonly used tobacco product among youth, with approximately 1 out of every 5 high school students being frequent users.

As of July 1, 2019, Virginia is one of the 17 states to raise the purchasing age of tobacco products to 21. It is unclear, however, how effective this change has been. “The age increase hasn’t prohibited me from getting nicotine, because I can either ask a friend who is 21 or someone with a fake ID to buy me [Juul] pods,” said a teenage user of e-cigarettes who asked to remain anonymous. “Personally, I would definitely stop buying pods altogether if they went up in price … I also know many people who have [used] Juuls or vapes consistently for the past year or longer, so it’s unlikely that they would suddenly stop purchasing these products just because of the price.”