‘A Night of Fear and Awe’
Votes

‘A Night of Fear and Awe’ 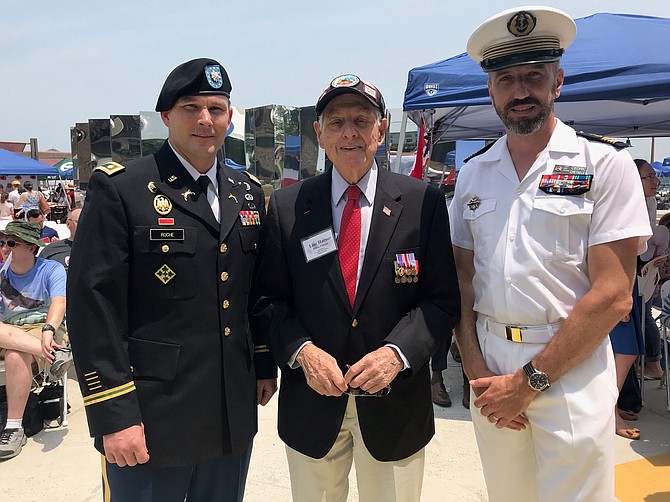 A visitor checks out a “Dingo” tank during the D-Day Commemoration Ceremony June 1 at Waterfront Park. Built in June of 1945, Dingos were originally designed in 1938 and used by British and Commonwealth forces throughout WWII.

“What a night it was” is how Lincoln Harner describes June 6, 1944, as he watched two German Luftwaffe planes battle the Allied Forces along the beaches of Normandy. “It was a night of fear and awe. And it is hard to separate the two.”

Harner, a technician fifth grade in the U.S. Army’s 987th Field Artillery Battalion, was with the British 50th Infantry Division to offer artillery support during the D-Day landings in Normandy. The former Alexandria resident shared his recollections of the invasion known as Operation Overlord at the 75th D-Day Commemoration Ceremony June 1 at Waterfront Park.

“We were late getting in,” Harner told the crowd. “We were supposed to arrive between 10 a.m. and noon on D-Day, but we didn’t get in until 7 p.m. due to heavy seas on the English Channel. We stayed on the landing ship docked on the beach through the night and watched all the battleships firing at the fortifications.”

Harner landed on the British Gold Beach the evening of June 6 and went ashore early the next morning.

“The main objective of our battalion was Caen,” said the 94-year-old Harner. “Caen was a vital road network. However, I never made it to Caen. It was heavily defended by the Germans and wasn’t liberated until July 20.”

The D-Day landings were a pivotal turning point in World War II and to this day remains the largest amphibious invasion in history. More than 160,000 troops landed in France and the Allies sustained at least 9,000 casualties on the way to opening up a Western front in the war against Germany.

It’s unclear how many D-Day veterans are alive today with survivors now in their 90s or 100s. Of the 73,000 Americans who took part, just 30 are scheduled to be in France for this year's anniversary.

Harner, whose WWII service also included the liberation of Paris, the Battle of the Bulge and the race across Germany to the liberation of Pilsen, Czechoslovakia, will commemorate the 75th D-Day anniversary at the National D-Day Memorial in Bedford, Va., along with other WWII veterans.

“I have never been back to Europe,” Harner said. “But on June 10, I will fly to Paris and for the first time since 1944 visit the invasion beaches. Unfortunately, I will not get to Caen this time either. But I’m only 94 so maybe next year.”