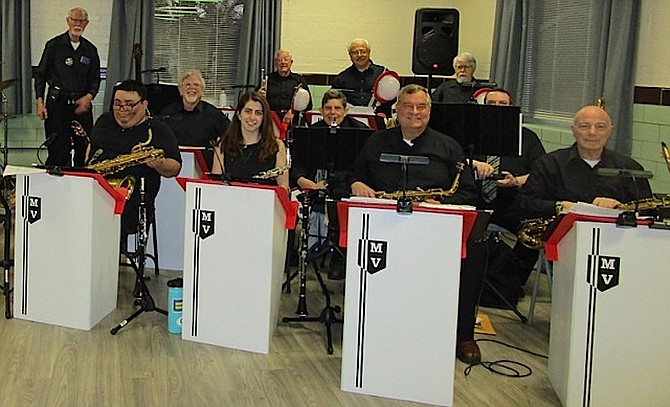 Concert Band rehearsals are held at Mount Vernon High School's Band Room at 8515 Old Mount Vernon Road, Alexandria, every Tuesday from 7:30- 9:30 p.m. Players at any level are welcome without audition. Bring your own musical instrument.

The band is a volunteer local group of musicians who wish to keep their musical skills in tune. Members include graduating high school students, former military musicians, college musicians, and other Mount Vernon area neighbors.

Band members, including the conductor, volunteer their time and represent a wide range of ages, careers and personal interests. The goal of the group is to provide pleasure and service to the community and enjoyment to the members who play music together.

Eric Leighty is the president of the band. See the band's website for conductor biographies, and scheduling information at www.mvbands.com/concert-band/

Owen Hammett has been a vital part of the volunteer Mount Vernon Community Band for over 25 years.

He conducted the Swing Band, the Dixieland band, and sometimes the German Band and the Concert Band.

He played the trombone and euphonium in all of the Mount Vernon bands (Concert, Swing, German, Dixieland, and Brass). Last Fall, he played the bass drum in the Concert Band and the German Band.

Hammett has also been the band's logistics expert, manager, scheduler, promoter, and announcer.

It will take five people to do the jobs that Owen has done over the years.

In recent years, Owen Hammett has volunteered with the National Park Service by coordinating, recruiting, scheduling and setting up for the bands playing in the Fort Hunt Park Summer Concert series. He invites all of the Mount Vernon Community Band groups each year.

He played in the volunteer Washington Redskins Band for 10 years.

Owen’s past musical resume includes: principal trombone in the University of Alabama Symphony, three years as a volunteer with the band of the Supreme Headquarters, Allied Powers Europe (SHAPE), leader of the Saint John’s Brass Ensemble (Saint John’s Cathedral, Izmir, Turkey). He has been performing big band music since the late 1950s. A native of Alabama, Hammett served in the U.S. Army, and worked as a civilian.

The MVCB has also granted an annual competitive Dale Moore Memorial Scholarship to a graduating senior from the Mount Vernon High School band program since 2002.