Tall Tales of Adventure and Mishap in Fairfax
Votes

Tall Tales of Adventure and Mishap in Fairfax 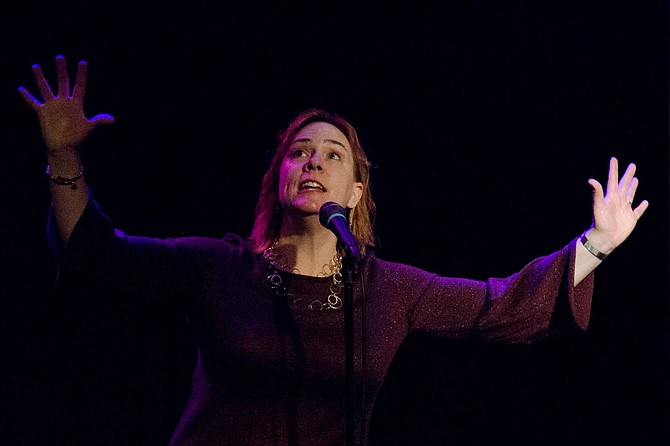 When Better Said Than Done Founder Jessica Robinson went to Tennessee to perform on the Exchange Place Stage at the National Storytelling Festival in 2018, she didn’t know what to expect. The festival lasted three days and attracted 11,000 people; 1,200 of them who watched Robinson perform a true, personal story. Once she’d survived that, she was able to take in the sights and sounds of the festival to try to understand why 11,000 would gather every year for something as ubiquitous as storytelling.

“As a performer of true, personal stories for the past 11 years, I must admit I was worried that I wouldn’t like the festival, that I’d get there and find people telling folk tales and tall tales and playing guitar and it would feel like I was stuck in elementary school assembly again,” Robinson said. “Well, the national storytellers did indeed tell tall tales and folk tales and yes, some even played guitar, and it was wonderful. Every performer truly earned the right to be called a professional, and every performance was better than the last. It was like taking in a show at the Kennedy Center, each time a new show started.”

Robinson wondered if there was a way to share some of the joy of the festival with her Northern Virginia Community.

“I spent the whole weekend marveling at the talent in the room, at these amazing storytellers gathered in one place. I kept thinking I can’t wait to go back to Tennessee so I can see some of these performers again. And at the very end of the weekend I had this hand-to-forehead moment where I remembered that I'm a show producer and could probably try asking.”

In January 2019, Sheila Arnold, one of the festival’s featured performers, came to Vienna and performed in a Better Said Than Done show with Robinson and another BSTD regular Nick Baskerville. The show was the first of its kind in NoVa, mixing true tales and folk tales. Following the success of that show, Robinson invited Norm Brecke and Anne Rutherford to come to Fairfax for a show on March 9.

“I loved every performance I saw. But I will say that one of the funniest shows was Anne Rutherford performing a story in character as ‘Clementine.’ Anne/Clementine told a tall tale of a search for some haunted pirate gold. The story had edge-of-seat drama followed by wet-the-seat laughter. Anne was enchanting.”

Rutherford, and her performing partner Norm Brecke, live in Oregon, but they travel the country telling tales and, yes, even playing guitar. Robinson asked them to join her on the Better Said Than Done stage in March and they agreed.

“We're excited to be part of the dynamic scene Jessica has created in Fairfax with Better Said Than Done,” said Rutherford. And then she added, “Of course, I am a 4-time winner of the Northwest Folklife Festival's Liars’ Contest, so don't believe everything I tell you.”

Join Better Said Than Done’s Jessica Robinson and nationally renowned storytellers Anne Rutherford and Norm Brecke for “Tales of Adventure: tru-ish stories of (mis)adventure,” Saturday, March 9, 2019, at 7 p.m., downstairs at The Auld Shebeen, 3971 Chain Bridge Road, Fairfax. Doors open at 6 p.m. Entry is $15 at the door (cash preferred) or $12 online at http://www.bettersaidthandone.com/storytelling-shows/ The stories are intended for a mostly mature audience.