Everyone’s heart beats just a bit faster with the excitement. 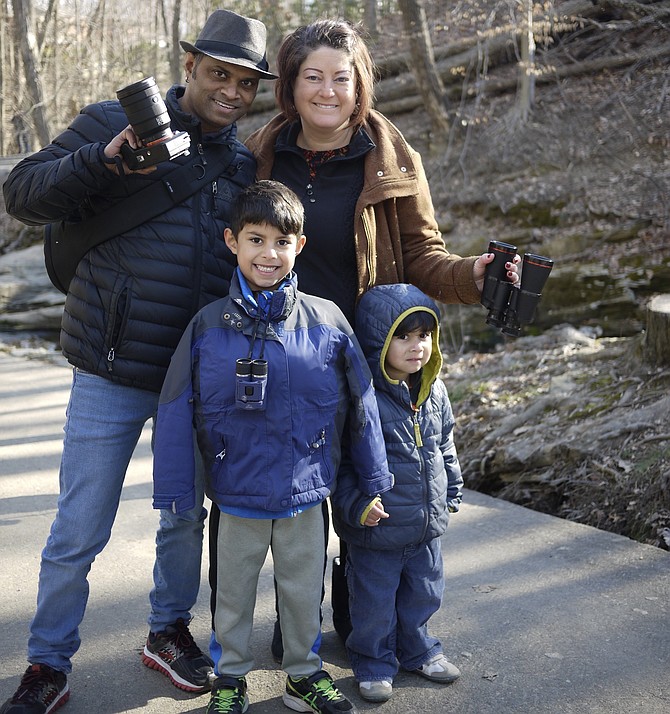 Swapnil Bhartiya, with his wife Jennifer and two sons, Aadi and Neev, said he is a technology reporter and doesn’t usually go out on walks but his wife “made him come” and he was glad she did. It felt great to get the boys away from electronics, he said. Photo by Eden Brown. 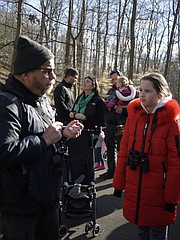 Bird watcher and Park Manager Cliff Fairweather with Sasha Wendell, explaining what birders look for. He joked that as soon as you hear a bird calling and tell everyone to listen for it, the bird goes quiet.

Even a seasoned bird watcher could learn something on Saturday’s bird walk for beginners at Long Branch Nature Center. Cliff Fairweather, the nature center manager who led the walk/class, made it exciting for the youngsters in the crowd, too.

“Do you hear that?” he asked the group. “Peter-Peter-Peter — that’s the call of the Tufted Titmouse,” he said. “That is what birds do, especially now, in the spring, because they are staking out territory or attracting mates.”

He said the time to bird watch or “listen” is early morning and late afternoon. They prefer to rest in the midday as it is warmer then and they get hot. “Birds have a much higher body temperature than we do, at 105 degrees Fahrenheit.” The group seemed to be surprised that birds were warm-blooded. “Yes,” said Fairweather, “and some believe birds are the descendants of warm blooded dinosaurs.”

Fairweather made sure the group saw some interesting birds, like the red-headed woodpecker, but even he was astounded when the group sighted a Barred Owl, who entertained the fledgling watchers with climbing around on one tree and then flying to the next. The owl blinked his big round eyes at the group and everyone’s heart beat a little faster from the excitement. “Barred Owls are most likely to be active during the day,” said Fairweather, “unlike most other owls.”

Fairweather told the group the local area, and this park in particular, are excellent for birdwatching. “Some birds we only have in the summer, like Great Breasted Flycatchers; some are only winter birds, like the Juncos. And some birds are here just to pass through during the migration; like I just saw my first ‘Phoebe’ (Phoebe Flycatcher),” he said, with the kind of pleased excitement only a nature enthusiast could understand.

Fairweather recommended to the group that they pursue birdwatching with some of the local clubs like the Northern Virginia Bird Club, the Audubon Society of Northern Virginia, and the Audubon Naturalist Society. Local nature centers are also good sources of activity, and it is always good to go with experienced birders because they can hear the calls, sight the birds, and the more people in a group (up to a point) the more eyes to spot birds who like to hide behind branches. He also recommended the warblers at Monticello Park, the C&O Canal, and Huntley Meadows as good spots to watch for birds. “The more habitats you explore, the more different birds you will see.”

For more, see: Audubon Society of Northern Virginia, or the Northern Virginia Bird Club (http://nvabc.org) (http://audubonva.org), or, go down and see Cliff Fairweather at the Long Branch Nature Center, https://parks.arlingtonva.us/locations/long-branch-nature-center-park/.