A Call to Save North Fork of Accotink Creek
Votes

A Call to Save North Fork of Accotink Creek

Local Audubon Naturalist Society does not like development slated for privately owned land. 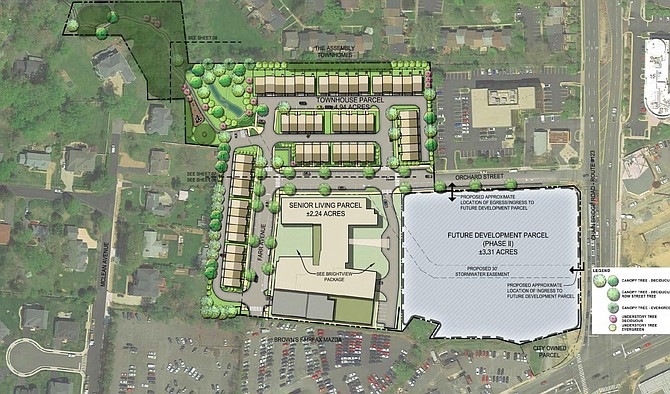 Just past the park sign garden that Ray Girouard was decorating runs the north branch of the Accotink Creek in the City of Fairfax. It’s a little creek 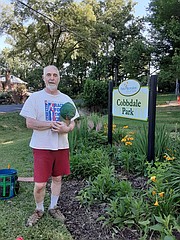 that eventually runs into the main branch of Accotink Creek further downstream, but it’s the center of a controversy surrounding the Northfax West development plan, and extending the underground route for the creek which already flows under the city. “I don’t think we should be burying streams,” said Girouard, who is the president of the Cobbdale HOA and a resident of Fairfax for nearly 25 years. At the same time, he looked at the section of land where the project is planned, and noted that it’s a parcel of privately owned land that is unsightly in some places, and is bound to be developed, so at least the Northfax West plan is one of the better options, he acknowledged.

City councilman Jon Stehle has been following the proposal for seven years, and had the same reaction. “There is no perfect project,” Stehle said, “we want an economically vital area,” he said, and supports it to some extent.

THE LOCAL Audubon Naturalist Society does not like it, and feels the proposal being considered would destroy steam and forest in the North Fork of Accotink Creek. And so the process continues, similar to commercial development projects all over the area where development is pushing out the natural environment. It’s going up for discussion before the city council on June 15, and Stehle will be there listening to both sides of the issue.

Northfax West is a mixed-use planned development on nearly 12 acres in a spot behind car dealers on Route 29 and 123 in the north part of the city. The applicant is proposing 56 townhouses, 200-unit senior living facility with structured parking, culvert on-site stream, disturbance in floodplain and Resource Protection Area, and road construction.

The north fork of Accotink Creek bisects the area, running parallel to Orchard Street, that dead ends in the middle of the parcel.

The Audubon Naturalist Society supports part of the plan, and would like to see acres of impervious parking lot into a more vibrant, ecologically focused activity center with walkable streets, denser development, better use of scarce land, rain gardens, bioswales, and green roofs, they said. That would start by postponing the rezoning while they bring in an expert ecologist.

According to Stehle, the developer of the project has been going through the permitting process for many years regarding the environmental impact to this area and submitted a joint permit application to the Virginia Department of Environmental Quality in June of 2018. After a public comment period in January 2019, the Virginia Water Protection Permit was issued to the Developer by Virginia DEQ in March of 2019. 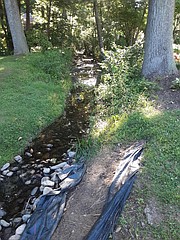 The North Fork of Accotink Creek.

IN JANUARY of 2020, the City Council held a work session on the three specific projects talking about the interconnected nature of all three of these efforts.

From the Audubon Naturalist Society standpoint, it’s clear that nature needs to be protected for people and wildlife during redevelopment. “There’s no way to make up for losing the living headwaters of the Accotink watershed,” said ANS Northern Virginia Conservation Advocate Renee Grebe, in her latest blog post about the proposed plan. “City residents are at risk of losing another natural place of solace, while owls, fish, and salamanders will lose their homes. We have seen with the COVID-19 pandemic that access to nature is a priceless commodity during all times, and especially during the worst of times.”

Even though the plan is acceptable, and could be worse, Stehle is hoping some sort of outdoor classroom or learning facility could be included. Streams are a good site for that. “It’s Chesapeake Bay Awareness Week,” he said.

The matter will be discussed in a virtual meeting on June 15 and then more formally by the City Council on June 23.