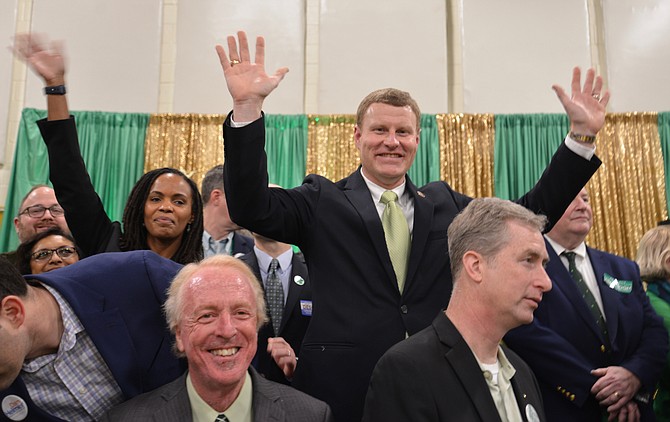 The winner – at least according to the Straw Poll. Lee District Supervisor Jeff McKay “won” his election to chairman of the Fairfax County Board of Supervisors with 57.5 percent of the 500 ballots cast at Connolly’s St. Pat’s Day Bash. “But it’s a great start,” said the candidate. Photo by Andrea Worker. 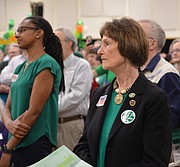 Fairfax County Board of Supervisors chair Sharon Bulova listens to the campaign speeches of the candidates who are seeking her seat. After more than 30 years of service to the county and 10 years as the chairman, Bulova will be retiring at the end of the year.

What started as an intimate gathering at Connolly’s Fairfax home when he was first elected to the Fairfax County Board of Supervisors in 1995 has evolved to become one of the largest Democratic gatherings in the Commonwealth.

“We’ve been coming to this event for years,” said Marvin Solberg of Fairfax. “We love the energy, being around people who are interested in, and working to help, the community and for the country.”

People mixed and mingled and enjoyed the corn beef and cabbage fare.

“I promise, we’ve gotten special dispensation to eat meat tonight,” joked Connolly, referring to the Catholic tradition of abstinence from meat during the Fridays of the Lenten season.

In case there were attendees of that religion who did not quite believe the congressman’s declaration and wanted to keep the faith in this regard, salmon was also on the menu, along with plenty of desserts and beverages to keep the high spirits flowing.

AMID THE CROWD of Connolly’s constituents, friends and family, the greater majority of Democratic candidates running for local offices in 2019 were on hand, as well. From incumbents to opponents, the diverse mix of locals seeking seats for Fairfax County Board of Supervisors, State Senators and Delegates, Fairfax County Commonwealth Attorney, Fairfax County Public School Board and Sheriff worked the room.

After the welcoming speech, Connolly gave equal air time to the four candidates running for the Board of Supervisors chairmanship – a seat long held by Sharon Bulova who will retire after her 10th year in the position and more than 30 years in service to the county.

Vying to head the board are Jeff McKay, currently the Lee District supervisor and the candidate endorsed by both Connolly and Bulova, Ryan McElveen, the At-Large FCPS board member, Alicia Plerhoples, a law professor at Georgetown and co-founder of progressive grassroots organization Virginia Democracy Forward, and Tim Chapman, a Fairfax businessman who has served on the Virginia Housing and Development Authority, initially as an appointee by former Gov. Terry McAuliffe.

Part of the evening’s action was a Straw Poll for both the position of Board of Supervisors chair, and for the attendees’ choice for President of the United States in the 2020 election. More than 500 “ballots” were cast at the bash – “Now let’s see this kind of turn out for the local June 11 primaries, the Nov. 5 elections, and definitely for next year’s Presidential selection,” said Connolly.

As the ballots were being counted, Connolly and Bulova took to the stage and began reading the names of all of the candidates from Fairfax County and even Prince William.

“Come on up,” Connolly instructed, as Bulova kept reading the long list of candidates. The assembled group challenged even the widest-angle lens when it was time to snap the photo.

TO CHEERS from his supporters, Jeff McKay was the clear winner among the party-goers for the chairman’s post with 57.5 percent of the votes. Plerhoples took second place with 29.4 percent. McElveen and Chapman came in third and fourth respectively, but McElveen said he wasn’t concerned. As an At-Large School Board member, McElveen says he is the only candidate for the position who has run for a county-wide office. “I have support from all parts of Fairfax County.”

As for the “election” for United States President, former Vice President Joe Biden was shown the love, defeating his closest opponent, U.S. Sen. Kamala Harris (D-CA), by a margin of 38.3 percent to 17 percent. Newly declared candidate Beto O’Rourke of Texas came in third in the Straw Poll.

Sadly, “no luck of the Irish tonight for O’Rourke,” laughed a Bernie Sanders supporter, whose preferred candidate finished sixth in the shortened-to-eight field.

Connolly is serving his sixth term representing Virginia’s 11th District, “but there is still so much to do, and with more Democrats, and more new energy, I know we can accomplish so much more.”