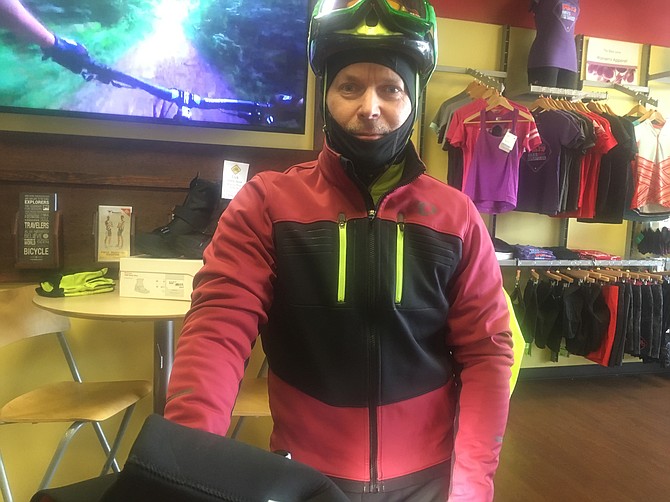 Officials are looking at the rules with ebikes on the trails. Photo by Mike Salmon.

Todd Mader ready to go out on the road with his ebike.

Springfield resident Todd Mader relies on his e-bike to get to both his jobs at the two Bike Lane stores that he and his wife own in Springfield and Reston. The recent proposal to allow ebikes on area bike trails is right down his alley. “I’m in favor of that 110 percent,” he said while wheeling his bike out of the Springfield store to go to Reston.

Electric bikes are out there and they may be coming to a bike trail near you. On the one hand, the electric bike provides mobility to seniors and

“Biking too fast is a behavior problem, not an equipment problem.”

others that are not able to ride the hilly trails so this increases the mobility for a certain part of the population. On the other hand, it would be introducing a motorized vehicle to a venue where they were forbidden in the past.

Mader commutes about 3,000 miles a year on his bike and although it’s not always in the electric mode so he does his share of pedaling, the electric motor is there when he needs it. “As a bike commuter, ebikes allow me to do that,” he said.

NOVA Parks recently had a meeting on e-bikes and they stated in their research that:

At the Washington Area Bicyclist Association, Greg Billing, WABA president, has been asked about speed and ebikes more than once.

“Biking too fast is a behavior problem, not an equipment problem,” Billing wrote. “You don’t need an electric motor to be a 25mph jerk on a bike. We’ve all had the experience of being buzzed on a trail by someone riding far too fast,” he added.

In addition, Capital Bikeshare recently announced that it will expand the fleet of electric Capital Bikeshare Plus bikes from 85 bikes to 500 under the pilot program which began in September 2018. The e-bikes – which are pedal-assist – provide an electric boost up to speeds of 18 mph. On some trails, the maximum recommended safe speed posted along the area bike trails is 15 mph so speed is a consideration.

“This is an exciting time in the National Capital Region as we continue to increase access to biking through innovation,” said Fairfax County Bicycle Program Manager Nicole Wynands. “The enhanced e-bike fleet supports our goal of providing more opportunities for commuters and travelers in Fairfax County to try biking as a viable option even in the hilliest parts of the county including Tysons.”