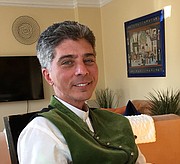 Dr. Lawrence Singer, a resident of Arlington and founder of the DC Smiles Holistic Cosmetic Dentistry practice, died unexpectedly April 10 at the age of 50.

“He fought hard for most of his life to live another day,” said his wife Tonya in announcing Singer’s death. “Lawrence loved life more than anything. He often would say, ‘Any day you open your eyes is a good day.’”

Born Oct. 31, 1968, Singer earned a bachelor of science in Human Development from Vanderbilt University and a doctor of medical dentistry at the University of Pennsylvania School of Dental Medicine. He founded DC Smiles in 1995, which included locations in Old Town, Alexandria, and in Washington D.C.

“My heart is broken for the loss of my boss,” posted Kathleen Delmore on social media. “Dr. Singer was a phenomenal clinician, mentor, friend and an amazing human being. I feel blessed to have been part of his practice.”

In addition to his practice, Singer was an Assistant Clinical Professor at the University of Pennsylvania, instructing doctoral candidates in restorative and cosmetic dentistry. He prepared several articles on oral healthcare economics for the Swedish Government at the Karolinska Institute in Sweden. Since 2000, he was the official cosmetic dentist for the Washington Redskins cheerleaders.

“Laz was such a brave man,” said Steven Olmos, referring to Singer by his nickname among friends. “Struggling with his health and dedicated to helping others with chronic pain. Such an intelligent person. The world has lost one of the great ones.”

Survivors include his wife Tonya, son Max, 13, and daughter Chloe, 11.

A visitation and Celebration of Life service was held April 27 at Cunningham Turch Funeral Home in Alexandria.

“The world has lost such a brilliant doctor, good friend, father and husband,” said Pam Washkewicz in a social media tribute. “He sure did love life and achieved so much while battling medical problems. Laz will be missed but never forgotten.”