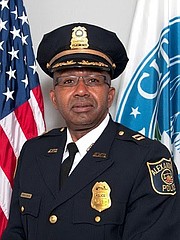 Donald Hayes has been named Assistant Chief of Police for Operations. Hayes is a 38-year veteran of the Police Department.

“After a national search, Don was chosen for this position based on his extensive operational experience in local law enforcement and his long and valued service to Alexandria,” said Police Chief Michael L. Brown. “His leadership of multiple divisions within the Operations Bureau over the course of his career, along with his dedication to the community we serve, make him an outstanding fit for this new role.”

Hayes grew up in the region and has been a resident of Alexandria for the past 25 years. He joined the Alexandria Police Department in 1981 and was promoted to sergeant in 1996. At various times after his promotion to lieutenant in 2000, he commanded the Special Operations Division, Information Services Section and Public Services Section, and served as assistant commander of the Patrol Operations Bureau.

Following his promotion to captain in 2013, he commanded the Traffic, Parking & Special Events Division and a sector of the Patrol Operations Bureau. In addition, Hayes commanded the Community Relations Division, where he also served as the department chaplain. He has overseen the Community Policing Section, School Resource Officer Unit and School Crossing Guard Unit.