High School Expansion: Next in Alexandria 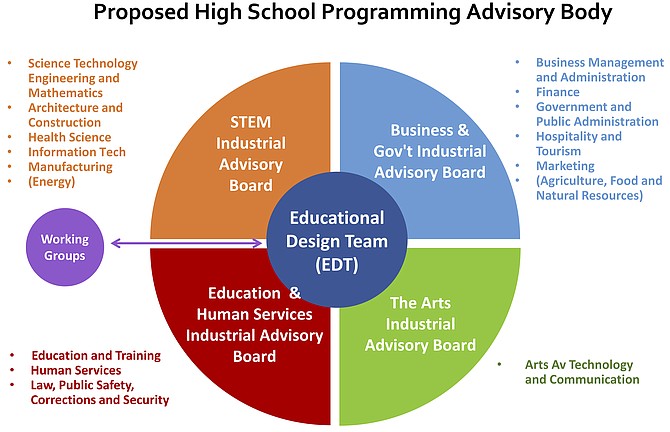 The city and schools’ current budget earmarks $119 million for the project — the second single largest capital investment on the city’s horizon after sanitary sewers.

But how that money will be spent remains undetermined. The School Board is weighing two options: (1) Superintendent Gregory Hutching’s recommended “Connected High School Network,” which would comprise a network of smaller campuses citywide; and (2) another comprehensive high school.

Here’s what new for their consideration:

Whereas freshmen are currently set apart at T.C. Williams’ Minnie Howard campus, the administration recommends incorporating grades 9-12, regardless of the decision regarding the School Board’s Connected High School Network.

“We will not be dividing our student population by grade level. … Minnie Howard will not stay a ninth-grade campus,” said the schools’ Erika Gulick.

The decision stems from a 2017 “Grade Level Feasibility Study,” briefed to the School Board last May.

The administration estimates that it needs 312,000 square feet of new facility space to accommodate 1,600 more students. Those figures represent major downward revisions from December estimates of 409,500 square feet for an additional 2,100 students. The revision owes in part to including the high school’s early college program, which would put students at the local community college.

The school division earlier determined that a comprehensive high school should accommodate no more than 1,650 students — a close match to the revised figures. However, land availability remains a constraint. A new stand-alone high school, including fields, parking, etc., would require about 20-30 acres, according to school division COO Mignon Anthony.

To use land it already has to address immediate capacity needs, the School Board earlier instructed Hutchings to draw up plans to expand Minnie Howard.

“We do think we have flexibility at Minnie Howard,” said Gulick.

The administration is working with the city’s planning and zoning department to modernize Minnie Howard, as well as analyze other properties that could accommodate 1,600 additional students.

Minnie Howard spans 12 acres, according a site study. But the city government would give some leeway in zoning restrictions, allowing a facility up to 60 feet tall, or 4-5 stories, on that site.

Toward defining new high school programming, which in turn will drive space requirements and site selection, the administration will establish an advisory “Educational Design Team.” The team will comprise 11-15 school personnel, including student representatives. In developing their recommendations, the team will consult with “Industrial Advisory Boards,” which will comprise community representatives from business, government, higher education and nonprofits.

The administration says it will evaluate site options according to a weighted index of both qualitative and quantitative factors, including: promotion of the “educational vision,” land/building availability and price, ability to address capacity deficits at other grade levels, community support or opposition, local economic impact, etc.

Zoning at George Washington Middle School would allow about 500,000 square feet of facility space, which is more than enough to accommodate the schools’ needs, said School Board member Michelle Rief.

G.W. and Francis Hammond middle schools both have zoning allowances for facilities larger than current T.C. Williams King Street and Minnie Howard. And both previously served as high schools in the 1950s. However, historic site restrictions would constrain the schools’ ability to repurpose that property, according to Gulick.

The city and schools’ budgets allocate about $15 million in FY 2020 (begins July 1) for project planning and $103 million in FY 2021. They also set aside $30 million for land acquisition, which the high school project could end up tapping into.

However, budgeted project costs could change within the next year.

"The design and the programming are going to have to inform what our [FY] 2021 request [to the city for funding] will be. It will be modified somewhat from what's in the [budget] now." said Anthony.

Some of that owes to rising construction and labor costs. The city budget includes $5 million in contingency to provide cost flexibility. And the schools say money recently freed up by a decision to repurpose the old Patrick Henry School Building as interim “swing space” will provide additional cushioning. But it may not be enough. The schools think rising prices might drive a 10-20 percent rise in project cost.

City Manager Mark Jinks said: “I have always considered the $119 M more as a large interim placeholder than a precisely calculated amount. … The high school solution/sites are not yet fixed and when that is better known a more firm calculation could be made. The Virginia local government system which bifurcates taxation and funding from the educational decision making creates interesting dynamics which is why it is vitally important to have a solid working relationship between the City and Schools (both at the staff and elected levels) so the discussion of needs and funding can occur collaboratively rather than occur as if on two separate planets. I think that the City and the Schools should be able to find an acceptable balance between educational facility needs and funding realities.”