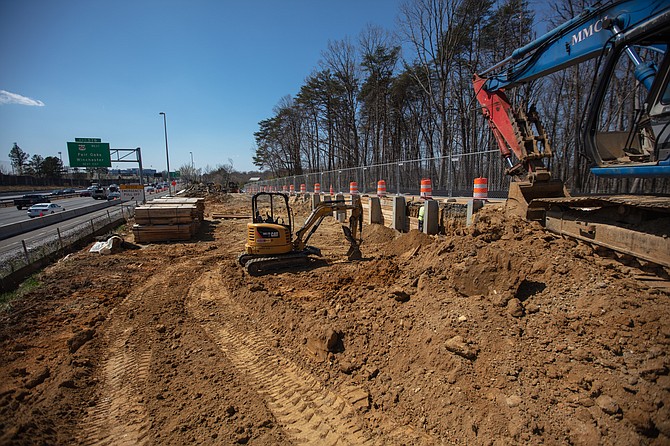 Looking west along I-66, the toll lane project is underway, a project that got high ratings on the state’s Smart Scale rating in the past. Photo contributed

At the VDOT’s Spring Transportation meeting, Shannon Valentine, the Virginia Secretary of Transportation, leads a panel to weigh all of the project benefits using the state’s Smart Scale rating system.

Transportation officials from the Northern Virginia area recently gathered at the Virginia Department of Transportation district headquarters for the Commonwealth Transportation Board meeting to decide what projects will move forward and what to put on hold. The meeting at the VDOT NOVA office was one of nine meetings held statewide this month. The information will be part of The Draft FY 2020-2025 six-year plan that identifies projects proposed for inclusion in the final program, which will be approved at the CTB’s June meeting.

“You know how competitive this process can be,” said Shannon Valentine, the Virginia Secretary of Transportation. There were lots of projects mentioned and lots of comments about the Smart Scale method that is used to rank them.

The Smart Scale is a statewide program that distributes funding based on a transparent and objective evaluation of projects that will determine how effectively they help the state achieve its transportation goals, VDOT information stated. This program is administered by the VDOT, the Department of Rail and Public Transportation, and the Office of Intermodal Planning and Investment.

Projects are ranked on their score using a formula considering the safety, congestion, accessibility, economic development, environmental quality and land use. In 2017, for example, the I-66 toll lanes outside the beltway, a project known as “Transform 66,” had a score of 60.687 which was the highest rating of all the projects on the Smart Scale list for that year.

In 2018, a railroad project called “the VRE Fredericksburg Line Capacity Expansion,” had the highest score of 64.25. A majority of the scores for both 2017 and 2018 were in the single digits.

The Congestion Analysis part of the Smart scale equation leaves room for speculation to some. “With transportation dollars always in short supply, having a funding process based on cost-benefit analysis rather than political deal-making just makes sense, and we should reward projects that help reduce the solo driving that clogs our roads and pollutes our air,” said Trip Pollard, Director of the Land and Community Program with the Southern Environmental Law Center, in a letter to Secretary Valentine.

“Smart scale does a cost-benefit analysis,” said Kelsey Crane, Conservation Program Coordinator, Sierra Club Virginia Chapter who favors funding for commuting methods other than road building. “There needs to be more options for commuting,” she said.

“The process is really good but it needs some refining,” said Jason Stanford, the executive director of the Northern Virginia Transportation Alliance.

Adding Up the Dollars

The meeting in Fairfax was to narrow the projects down, talk about the money available, and come up with a list of projects that are to be put on the upcoming six-year plan, and this will be compiled by mid-June.

As in transportation planning efforts in the past, the areas in the outer suburbs favor road building while the places closer to the metro area want more emphasis on transit, biking and pedestrian facilities as a method of transportation.

Christian Dorsey, the chair of the Arlington County Board, pleaded his case for transit and biking, and Virginia Delegate David LaRock (R-33) was thinking about the roads. It’s an argument that has gone on for years and it’s based on the constituent needs.

“Walking, biking and transit are the most important transportation methods in our county,” said Dorsey. He stressed that VDOT does not track the numbers when it comes to bicycling, particularly in Arlington, and should start a monitoring program to get an idea.

LaRock heard the arguments for multimodal transportation methods and transit, but questioned the limited funding. “Where’s the money going to come from to fix the roads?” he asked. The bike and pedestrian projects have “such a small effect on the region as a whole,” LaRock said.

Bill Cuttler, VDOT’s Assistant District Engineer for Construction, called the road or trails dilemma “an interesting dynamic.” If Cuttler had his way, they’d all be built, but again, “it’s a matter of funding,” he said.

Then others had items on their wish list as well, each with their own list of viable reasons. The mayors of Alexandria and Herndon had particular roads on their agenda, while Supervisor John Foust, (D-Dranesville) had his funding concerns. Although Chairman Sharon Bulova, the Fairfax County Chairman of the Board of Supervisors was not at the meeting, a staffer handed out a letter with her wish list on it that included a bus rapid transit system on Richmond Highway, a Connected Autonomous Vehicle shuttle in Merrifield, bridge rehabilitation, commuter services and mowing and trash clean up.