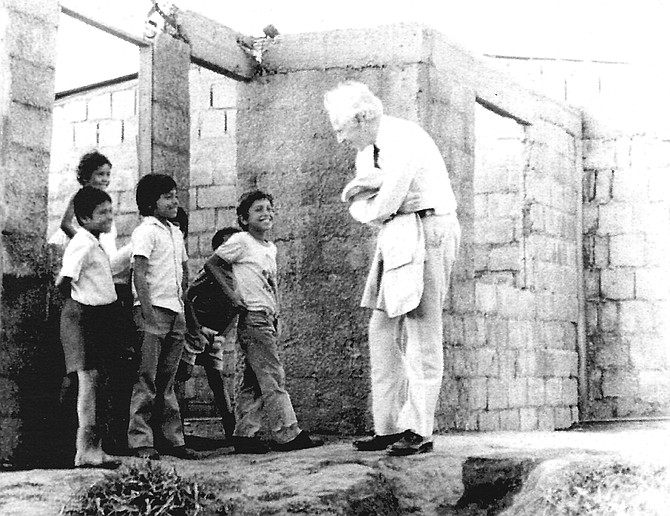 Peter Kimm on a housing site visiting with children. 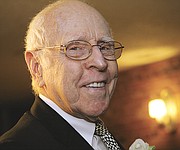 Peter Melia Kimm, whose innovative work on affordable housing in the developing world continues to have an impact, died peacefully at home in Potomac, Md. on Saturday, March 30. He was 89.

He began his 30 year career guiding the U.S. Agency for International Development Office of Housing and Urban Development in 1966. His relentless pursuit of mission revolutionized the construction of sustainable housing for poor urban families in the developing world.

The USAID Alumni Association referred to him as “an agency legend.” Peter Kimm built a group of professionals with remarkable camaraderie dedicated to their mission.

“Peter was well loved and respected as a leader, mentor and pioneer,” said Chris Milligan, Counselor to Agency for International Development. “In addition to helping millions of families around the world realize more affordable housing, he mentored and guided countless people within USAID … with his dedication and forward thinking. Throughout the years, USAID staff members have felt an enormous privilege to have worked with Peter.”

“He blazed the Agency’s path in housing and urban development. He built and championed the innovative housing guaranty program that leveraged U.S. private-sector resources to fund houses and services to help the world’s urban poor,” Milligan said.

“Peter’s Housing Investment Guarantee program had such an impact because Peter insisted that the program help poorer people,” said Peter McPherson, Administrator of the U.S. Agency for International Development from 1981-87. “The streets and plots had to be well laid out with clear title for the new owners. The plots usually had no more than the basic house frame and utility connections, and the new owners gladly finished the work themselves. Peter always focused on holding down the purchase price for the new owners.

“Because Peter had the guarantee/money, he could be a hard negotiator with the host government which sometimes wanted to build fully constructed middle-class housing,” McPherson said. “Peter’s work continues to inform us all.”

Over the 40-year life of the Housing program (1963-2002) more than 200 loan guaranties totaling $3.1 billion were issued, providing direct benefit to more than 30 million low-income individuals in 48 countries. The loans from U.S. financial institutions created the incentive for sweeping policy changes in many countries, leading to the creation of important public and private institutions, and improved access to finance and municipal services.

Peter Kimm defined his program as one whose real purpose was to help developing countries solve their own shelter problems. “We do this through financial and technical assistance. … We hope to set in place systems that will solve the housing problem.”

Governments in developing nations can’t afford to build enough of the right kind of housing to provide shelter to most people who need it, Kimm said. “The approach that we’re talking about now is that the individual initiative, the initiative of families primarily, and the initiative of the private sector, that is builders, developers, and lenders, will solve the housing problem IF the governments create the framework.”

In 1981, President Ronald Reagan recognized Peter with the Presidential Rank of Distinguished Executive Award, the most prestigious recognition that can be given to a member of the U.S. Senior Executive Service. He was the first from USAID to receive the award.

In June 1996 at U.N. Conference Habitat II in Istanbul, Assistant Secretary General Wally N'Dow praised Kimm for contributing “more over the past 30 years towards the housing needs of poor people than anyone else in the world.”

In October 1996 at United Nations Headquarters in New York, Peter Kimm received the HABITAT Scroll of Honor Award, for 30 years of “outstanding service assisting developing nations worldwide respond to housing needs of low-income families and to meet the challenges of rapid urbanization,” recognizing his work in Latin America, Africa, Asia and Eastern Europe.

Peter Kimm received The Cooper Union Gano Dunn Award in 1985 for outstanding public service, and the President’s Citation in 1998 for contributions to his profession. He was one of the 150 alumni chosen for the Hall of Fame at the 150th anniversary of the Cooper Union in 2009.

He served in the U.S. Army during the Korean War, 1951-1953, rising to the rank of Master Sergeant during his deployment in Korea. He led a combat construction platoon, receiving multiple awards. He was on the troop ship coming home when the truce was finally signed.

He married Grace Anderson in 1954 and they settled in their native Brooklyn. Peter began a rigorous course of study at The Cooper Union in New York City at night while working construction during the day. He received his Bachelor of Civil Engineering degree in 1958, and became a Licensed Professional Engineer. He then supervised construction of buildings, roads and highway bridges.

In 1961, in response to President John F. Kennedy’s call to “ask what you can do for your country,” he and his brother launched their families (including four children under seven) on an odyssey of public service — first with a Peace Corps-type organization to Paterson, NJ and Seton Hall University, and then to Cuernavaca, Mexico and learned Spanish. They engaged with Ivan Illich, Margaret Mead, Philip and Daniel Berrigan, and others, with a volunteer organization in US & Mexico.

After USAID Housing Guaranty Program, Peter Kimm went on to be Director for the USAID Environmental Center (1993-97) and Director of the USAID US-Asia Environmental Partnership (1998-2002).

After he retired from USAID In 2002, he later founded the International Housing Coalition in Washington, D.C., and served on its board.

Peter Kimm was devoted to his grandchildren, especially after the death of his oldest son Peter Jr. in a car accident in 1995. He attended sports practices and games of children and grandchildren, sometimes coaching from youth soccer to high school lacrosse, basketball, and football.

Peter and Grace Kimm’s children and grandchildren all live nearby. Holidays and the many birthdays bring the family together often.

A lifelong athlete, he enjoyed basketball, tennis and cycling, forming close friendships with those he played with.

He was part of a group of retired friends that bicycled weekly together for more than a decade, engaging in lively political conversation during breaks. This later evolved into a “New Yorker” reading group, meeting monthly.

Peter Kimm is survived by his wife of 65 years, Grace Kimm; his son Christopher Kimm of Reston, SVP of Equinix; daughter Mary Kimm of Potomac, Publisher of Connection Newspapers; daughter-in-law Virginia Fowler of Potomac; brother, Victor Kimm of McLean; and their families, including 10 grandchildren and three great-grandchildren.

Written the day of my father’s death.

My father Peter Kimm died peacefully at home Saturday morning, March 30, 2019, a few minutes after 7am. My brother and I (and others) had special time with him on the day before. He was 89.

My mother Grace was with him when he died, and continuously before, not leaving his side for weeks in the hospital or the time at home. The doctor said she was the most devoted family member he had seen.

My parents celebrated their 65th wedding anniversary in January.

My father was a remarkable human being and I can’t begin to touch all the ways he made the world a better place.

He launched our family and his brother’s family (including four children under seven) on an odyssey of public service — first to Patterson, NJ and then to Cuernavaca, Mexico, engaging with Ivan Illich, Margaret Mead, the Berrigan brothers and others, and learning Spanish along the way.

My father went on to pioneer sustainable systems to finance and build affordable housing in underdeveloped countries around the world working with Agency for International Development.

He and my mother were on the National Mall to hear Martin Luther King Jr. give his “I have a dream” speech. They were hands-on for the Poor People’s Campaign. All the while my mother worked for peace.

When I meet people who worked with him, they always convey that he was a role model, an inspirational man to work with.

Things my father taught me by example and explicitly: Make a difference. Do something that matters. Do it with passion. Know no fear. If you haven’t made anyone angry lately, you probably aren’t doing anything important. Excuses don’t matter. Results matter. And so much more … (I’m not saying how successfully I learned these lessons.)

Despite the difference he made in the wider world, Peter Kimm’s most important role was quite possibly as Papa, with 10 grandchildren and 3 great grandchildren. We will all miss him so much.

Montgomery Hospice and their nurses provided amazing support making it possible for my father to be at home. It gave all of us some peace and connection that was just not possible in the hospital.