Seniors, Teens Growing Together in Arlington

Planting under tutelage of Master Gardeners. 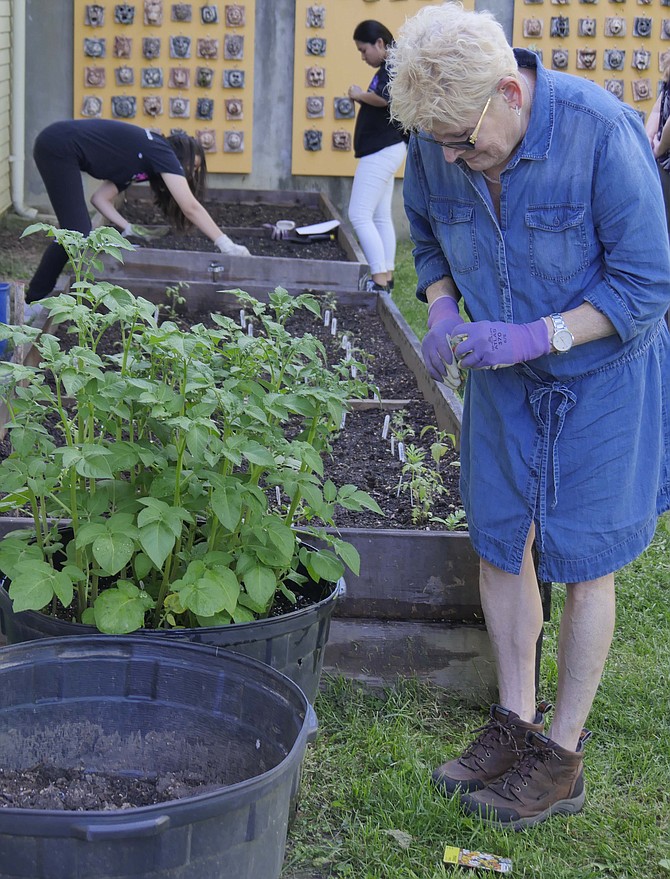 Ramoni Lukstele, an intern Master Gardener, checks out the bin of potatoes and speculates on when they might be ready to dig up. Photo by Shirley Ruhe. 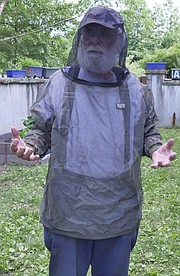 Paul Diehl, a beekeeper for decades, is on hand to answer questions about bees and pollination. 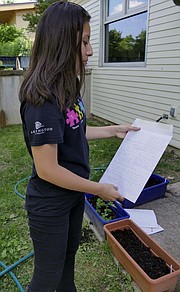 Suiana Fernandez reviews the list recording the details of dates for planting, watering and the progress of growth.

Step out the side door of Walter Reed Community Center into a garden with a large pot of healthy potatoes interspersed with a profusion of collard greens and lettuce, empty rows ready for bean and zucchini seeds, and fledging newly-planted tomatoes.

Luna Gamboa digs a hole several inches deep in a nicely composted plot of soil and carefully places a tiny carrot seed in the hole. She continues digging holes down the row. “I am planting a row of carrots beside a row of radishes, because when the carrots are ready, I’ll know the radishes are ready, too, since they take the same amount of time to grow.”

Gamboa, a student at Thomas Jefferson Middle School, has been coming one Thursday a month since March as part of the intergenerational garden team at Walter Reed Community Center.

Margo Watters, team program supervisor, says she started this program five years ago. “The first year it was just me and one lady with the teens and we just planted lettuce. But then later volunteers came from the Master Gardener program so we could plant different things such as potatoes, zucchini, and my personal favorite, collard greens.”

Last year, Watters says, they had a lot of peppers and tomatoes. “Last year the tomatoes grew like crazy. We had to have sticks up. They were small but delicious.” They also had eggplant and jalapeño peppers. The year before she says they tried watermelon “but they only grew this big;” she holds her hands up to indicate about six inches.

“And we also plant herbs,” she adds, pointing to boxes sitting on top of a wall. “One of the teenagers told me last week she took home mint and used it in her tea. We let the teenagers and the volunteers take home the produce and at the end of the season, we’ll have a party with salad and appetizers from the garden.”

Watters says the program runs with a team of teens and the senior volunteers and Master Gardeners. “The teens plan what to plant and then the Master Gardeners give us suggestions.”

“Anyone want to help with the spinach?” Suiana Fernandez, also from Thomas Jefferson Middle School, is replanting spinach seeds. She explains that the senior citizens volunteering at Walter Reed were watering the plants between meetings but without a schedule so the spinach seeds got overwatered and didn’t survive. So they are trying again.

Ramoni Lukstele, an intern Master Gardener, says she just started the Master Gardener program last fall and is now working on the intergenerational project as part of her training. She helps the teens decide what to plant. Lukstele observes a plot of several-inch high tomato plants and comments that the tomatoes are planted too close together and will crowd each other out as they grow bigger. “So we’ll remedy that. Of course, they aren’t all tomatoes; there are marigolds filling in to attract the good bugs like aphids and repel the bad ones.”

Paul Diehl, a beekeeper for decades, is also on the scene to answer questions about bees. It depends on whether a plant needs pollination. “Some people don’t understand.” He says he has about 10 hives out in the county. He says every beekeeper does things differently; if you got rain, plants just don’t produce pollen and nectar so you won’t get anything for the bees and have to make syrup for food.

Karole Lieber, who is a volunteer with the intergenerational garden, says the volunteers go to classes so they can assist with adult supervision on decisions about what to plant when, what are the enemies or friends of plants. “And we learn a lot by our own mistakes.” She says they help the teens record everything so they can keep track of the dates each seed is planted, when they are watered and measure how the plants are progressing.

This program is co-managed by the Arlington County Department of Parks and Recreation Office of Senior Adults and Office of Teens.