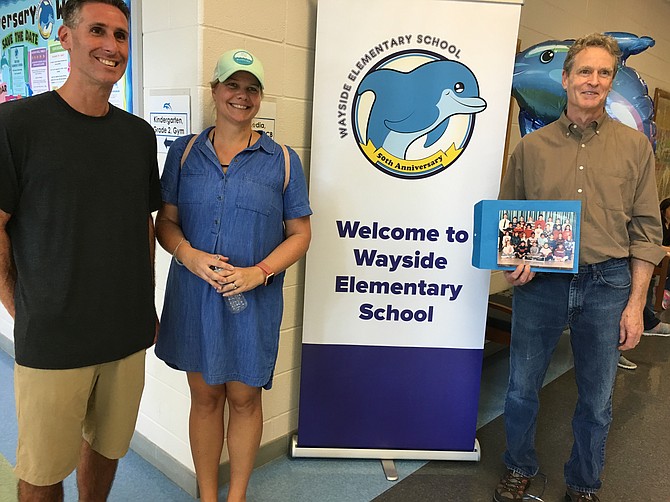 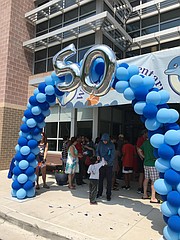 Wayside Elementary School celebrated its fiftieth anniversary on Saturday. The school opened in 1969. 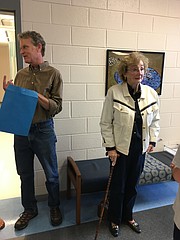 Marcelon Kert, right, taught second grade at Wayside when it opened in 1969. John Graham, left, taught at the school for nine years, beginning in 1986.

Wayside Elementary School celebrated its 50th Anniversary on Saturday, May 18, 2019, with a school carnival, open house and the unveiling of an anniversary work of art, and even a politician. Councilmember Andrew Friedson attended Wayside.

Friedson said he began his advocacy work while an elementary student at the school.

Fifty years, and the school is now only two years old. Was it “back to the future?”

No. The original school was torn down and replaced by a larger, brighter, two-story building which opened in 2017.

For many former students it was a “blast from the past” anyway.

Evan Schaffer and Carrie Begin, both from the class of 1988, visited with their fifth-grade teacher, John Graham.

“He was our favorite teacher,” Begin said. “We had a Facebook page [for the anniversary] and people said, ‘I’ll go if Mr. Graham is there.’”

While they were talking, another alum, Brian Taff, came up and mentioned running the school store. It was a store on a cart, he said, because there was not room for a real store.

Schaffer said he ran the school store too and they compared what items were the best sellers. Though Taff left the school in 1979, the ten-year difference did not show much change in students’ taste.

They both remembered selling gummy erasers and chips.

“It was the highlight of my career,” Taff said. He also said he did not stay in retail.

Marcelon Kert came back for the celebration. She was a second-grade teacher when the school first opened.

“Glen Road wasn’t paved,” she said. “There was one strip down the middle with gravel on both sides.”

She also told of getting the school ready to open.

“There were nine of us [teachers] when we opened,” she said. “There was no running water in the school until the day it opened.” No heat either. “We huddled together for warmth,” she said.

As teachers, former students and current students stopped to speak with her, Kert said she was happy to be back.

“You can’t know how thrilled I am seeing people,” she said.

Another thrill for the day was the unveiling of the student art installation on the grass in front of the school.

During the last few months students and staff each painted a rock. These were embedded in a concrete “stream,” flowing with the rocks and ending in a circle containing the representation of a dolphin, Wayside’s mascot.

The unusual thing about the artwork, besides the fact that all the students participated in its creation, is the dolphin is embedded with synthetic crystals that glow in the dark.

“It really is amazing to see what we did in art turn into this great project,” Justin, a fifth grader, said.

Principal Donna Michela said she was surprised by the large turnout and pleased by the people who came back to the school from years ago.

She is a long-time Wayside staff member herself.