‘I Knew I Could Make a Difference’
Votes

‘I Knew I Could Make a Difference’ 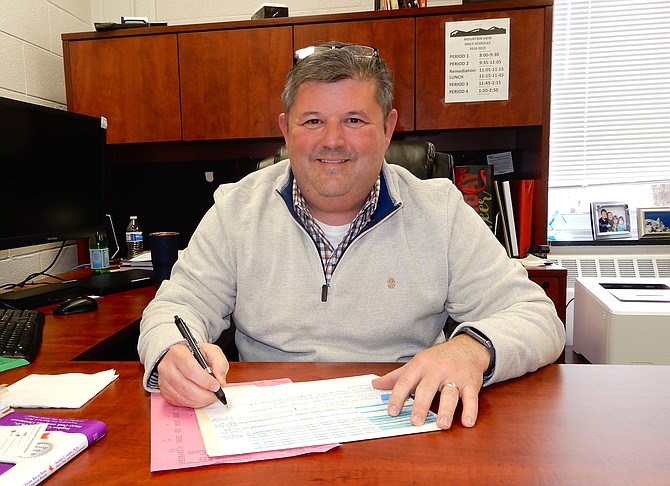 Born in Fairfax and raised in Springfield, Joe Thompson always wanted a career in education. Good thing – because he’s been an educator for 29 years and Mountain View High’s principal since November 2018.

However, for a short while, he considered becoming a sports writer, so he obtained a bachelor’s in English from Clarion University in Pennsylvania. But his dad was a P.E. teacher and coach in Fairfax County and, eventually, Thompson chose teaching, too, and got a master’s in special education from George Washington University.

In 1995, he began teaching special ed and coaching football at Woodson High, later doing the same thing at Oakton High and becoming its head football coach in 2002.

Being a leader, he obtained his endorsement in supervision and administration from GMU in 2010, and the next year, became assistant principal at Annandale High.

“There’s not a lot of difference between being a head coach of a program and a school administrator,” said Thompson. “You have to be able to articulate a vision, include parents and staff in it and connect with children. You also need to recognize that the educational experience will have some failures – and being able to help people work through loss and failure is an important part of being a school leader.”

Similar to a team losing a game or a basketball player missing an important shot, explained Thompson, “The resiliency that’s a natural part of coaching transfers really well to school leadership. No matter where you are in the moment, what happens next is what you can control. And the willingness to try and fail and try again – because you know you’re cared about – is what I bring to school.”

AS AN ASSISTANT PRINCIPAL, he liked impacting a large number of people by “helping different teams of teachers put great programs in place. That whole, collaborative spirit really motivates me to do a good job as both a student-and-teacher leader.” He was at Annandale three-and-a-half years; then came a three-year stint at Quander Road Alternative High in Alexandria, with one year as assistant principal and two as principal.

“I liked that you can really know the students by name and by the complexity of their needs because of the smaller setting” said Thompson. “You can determine the roots behind their behaviors and start to address them, which is too difficult in a huge school.”

Indeed, one of the reasons he wanted to become Mountain View’s leader was “to work with this particular population of students and this faculty that does a great job. Mountain View kids’ needs are different; almost all are on their own or are carrying adult responsibilities of running a household.”

At Mountain View, said Thompson, “The teachers become the students’ biggest advocates – which doesn’t always happen elsewhere in other schools that have parents to do that. And growing up in Fairfax County, I have a drive to make sure that every student, regardless of their family-system background, has the same opportunities I did.”

He replaced the school’s former principal, Gary Morris, who became South County High’s leader. And since Mountain View is in Centreville, it’s also closer to Thompson’s home in Chantilly’s Poplar Tree Estates, where he lives with wife Donna (a Centreville High counselor), son Tyler, 18, and daughters Mackenzie, 17, Paige, 10, and Abigail, 8.

But there’s also another reason he wanted to come here. “When I was at Oakton, I had students in danger of not graduating, and they went to Mountain View and thrived,” Thompson said. “So I toured the school, 20 years ago, and was so impressed that I wanted to someday come here myself. I knew this was my niche in the community and that I could make a difference.”

And six months in, he says Mountain View is “everything I thought it would be; it’s been a great experience. There’s just a spirit in the students and faculty that you can’t capture anywhere else. You see it at graduation, and you see it when you walk the halls. The values of [the school motto], ‘Family, Love and Respect’ are embodied in the school – they’re not just a tagline.”

And, he added, “The Mountain View Foundation is amazing in the work it does finding scholarships for our students. And it’s also supporting our alumni still in college; we don’t want to let these kids fail. For example, one boy who eventually became a nurse at Inova Fairfax Hospital, got married and became a father of twins, said it all began with that $1,000 he got from the Foundation.

“It got him into college, where he met his wife and began working toward a great career. And it was all because somebody from the Mountain View Foundation believed in him enough to get him started. And when things got tough for him and he felt like giving up, he didn’t, because he remembered he had a responsibility because of that scholarship.”

So, stressed Thompson, “Mountain View students really get a chance to change their life’s trajectory. And it starts with that resilient, Mountain View spirit that lets them know they can overcome adversity and can be great parents and great students. The strength of the school is embodied in the students working to overcome obstacles and a teaching staff committed to meeting their needs. It’s also found in the community of support that helps lighten their load and really relates to our students.”

BESIDES THAT, he said, “There’s really great instruction happening here – talented teachers who know the curriculum and adjust it to meet the needs of our diverse population. We have students from 14 different schools, so everyone comes with different abilities and a different place in the program of studies.”

“So the challenge is finding a way to connect with each student and find a way to deliver that instruction in the most effective way,” continued Thompson. “And I think that’s what motivates and rewards our teachers, and that’s why they take such ownerships of their students’ education.”

He said the school counselors, clinical team and support staff are all dedicated to the mission, too. “I want to continue to help them recognize the value of that growth mindset,” said Thompson. “My job is finding how best to support the students and teachers to achieve their goals.”

Toughest, he said, is, “Being new, making sure I fit in and people can establish a level of trust. I want them to understand I’m part of the team here and I intend to stay.”

Most satisfying, said Thompson, is “Knowing we’re doing great work and making a difference in people’s lives. Students come to us because they haven’t seen a pattern of success in their educational career. And in a lot of ways, they have very little faith in education.”

So, he said, “Seeing that light bulb go off that ‘I am capable and am just like a learner anywhere else’ – and them realizing they can experience success in school – is one of the things that motivate me to come to work. We’re looking to maintain what’s great about Mountain View, and we see ourselves as a strong part of this community.”