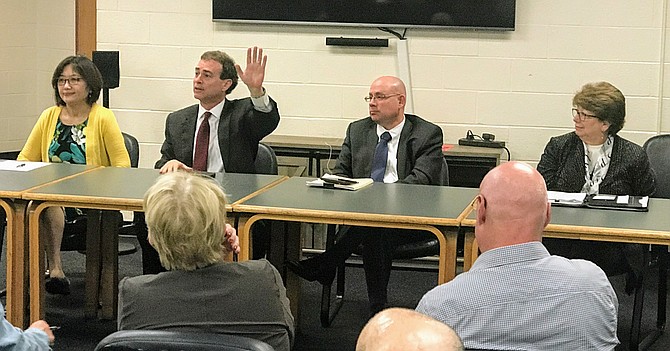 “The lower part of district is against 270 and 495 widening and tolls. The northern part of the district wants the expansion,” said Del. David Fraser-Hidalgo.

“Environmentally [a new bridge] is a disaster,” said Feldman. “We represent the agricultural reserve. On the state level, there’s not going to be a push if there isn’t support for it.”

But the question of widening the major highways that pass through Potomac and Montgomery County to add toll lanes is less settled.

“This is an event we always enjoy,” said House Majority Leader Kathleen Dumais, on Wednesday, May 8 at the Potomac Community Center. More than 40 people attended.

Legislators considered some 2,500 bills, Feldman said, a significant workload. “That’s all done in 90 days; every bill gets a hearing, if you sign up, you get to testify.”

Dumais became Majority Leader this year. “I was honored to receive that role, and my role shifted. I was told, ‘I need you to be two inches deep in everything.’”

LACK OF LEADERSHIP at the Federal level impacts the state level, the four members of the delegation said.

“It’s up to the states to take the lead in climate change action because of federal inaction,” Feldman said.

“It’s gut wrenching to have the EPA programs that would help the Chesapeake Bay gutted by this administration,” said Fraser-Hidalgo.

This session, Maryland protected five sanctuaries where oysters cannot be harvested. Oyster populations, which help filter the Bay, are at an all-time low; “the population is just two percent of historic levels,” according to Dumais. “We are at a tipping point and bold action is necessary to save this keystone species for the Chesapeake Bay.”

“It was absolutely the right thing to do,” she said.

Maryland has also banned styrofoam carry-out containers, said Lily Qi, Maryland’s first Chinese-born member of the Maryland General Assembly. The Bill will go into effect on July 1, 2020, making Maryland one of two states to do so.

Fraser-Hidalgo said autonomous vehicles are coming, parking lots will soon be outdated, and predicts in the next 15-20 years that “fewer vehicles will be on the road” because of an “unprecedented time in transportation technology innovation.”

“Completely different ways of moving people are coming,” he said.

Some attendees pressed lawmakers on why more wasn’t done on climate change and reducing emissions.

“It takes time to educate people on climate change,” said Fraser-Hidalgo, who is on the House’s environmental and transportation committee.

There is a limited amount one state can do to make progress on climate change, Feldman said. It requires leadership at the presidential level.

DEMOCRATS PICKED up eight seats in the last election, and now have 99 delegates, giving them extra power to push their agenda.

“This is the year we had enhanced juice,” Feldman said.

To flex that muscle, Dumais led four veto overrides with the session still going on, including protecting Bay oysters with five sanctuaries, raising the minimum wage to $15, a minimum age requirement of 21 to buy tobacco, and allowing localities to decide when the school year starts and ends.

Another success, said Dumais, was Increasing child care credit to $14,000 a year, fifth highest of any state.

Qi hopes to improve Maryland election law, which she called “not immigrant friendly.” But her bill on election access, which would give more access in the primary by allowing later registration by party, didn’t get a vote.

Feldman was the primary sponsor of the Bill which increases Maryland’s renewable energy portfolio standard from 25 percent by 2020 to 50 percent by 2030.

“This legislation will bolster the offshore wind and solar industries,” according to Dumais. Currently, Maryland has 170 solar companies. By 2028, it is predicted that there will be 20-25,000 solar jobs.

Maryland is one of 11 states to receive a Triple-A bond rating. This session, it passed the Clean Cars Act of 2019. The bill provides $6 million in excise tax credits each fiscal year to purchasers of new zero-emission vehicles. Maryland has a goal of 300,000 zero-emission vehicles on the road by 2025.

Maryland also became the first state in the country to implement a program that allows families to use tax information to qualify for health programs. The legislation establishes Maryland’s Easy Enrollment Health Program, “a simple, seamless system for enrolling uninsured Marylanders into free or low cost health insurance coverage by adding a checkbox on state income tax returns.”