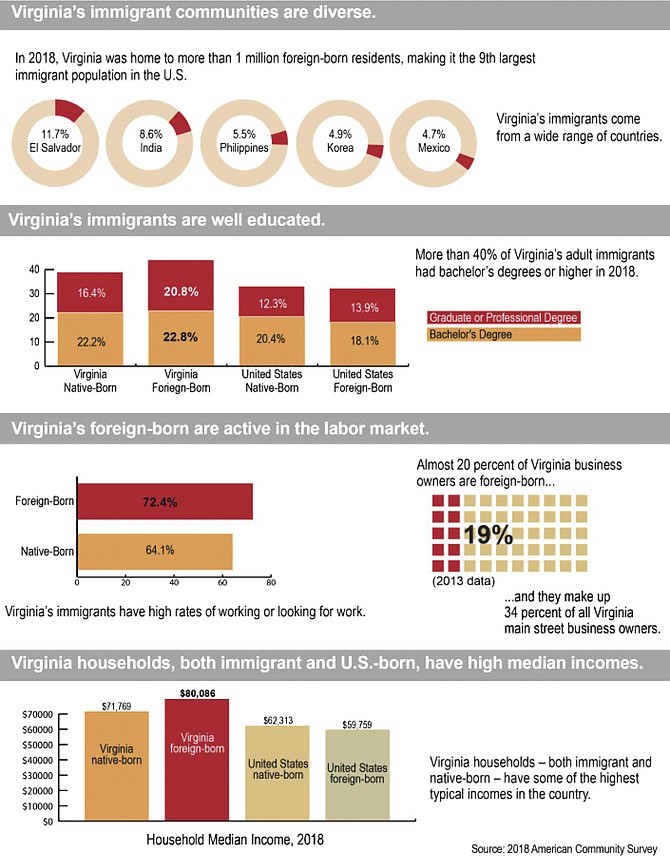 “Many of the immigrants who come to Virginia bring with them a high level of skills,” says Laura Goren, research director at the Commonwealth Institute. “They’re coming to fill the need for highly educated workers in, for example, government contractors and the tech industry in Northern Virginia.”

Here in Alexandria, almost one out of every three people is foreign born. Most of those are not U.S. citizens, although the city is home to 17,000 naturalized U.S. citizens. The vast majority are from Latin America or Africa, regions of the world that have thriving communities in Alexandria. They face an administration in Washington that plans to start turning away immigrants who currently have “temporary protected status,” people fleeing war, violence, famine, disasters and epidemics across the globe.

A recent survey of entrepreneurs by the Census Bureau shows the number of Hispanic-owned businesses in Virginia on the rise. During a three-year period, the number rose 13 percent. Just like a century ago, when Russian Jews flocked to America to be part of the needle trade, people from El Salvador and Honduras are now arriving here in Alexandria as entrepreneurs.

“Part of being a business owner is that you take chances,” said Michel Zajur, founder and CEO of the Virginia Hispanic Chamber. “And immigrants are more likely to start a business a lot of times.”