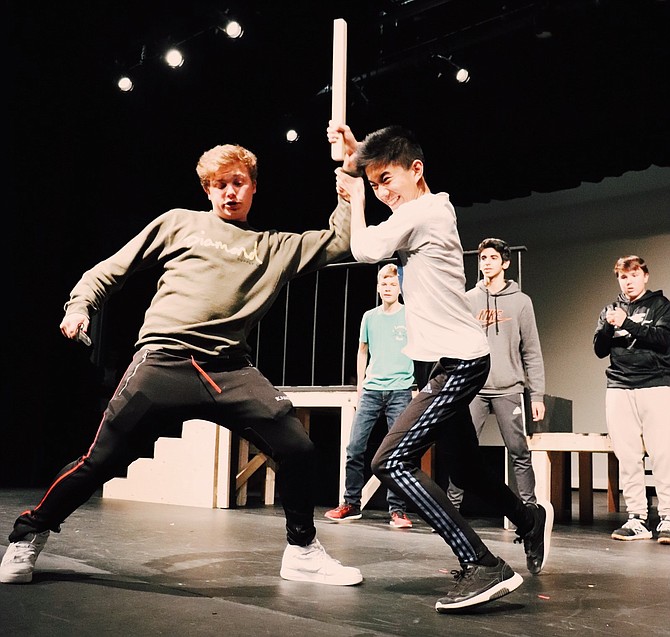 Chris Morgan (Tybalt) and Leland Hao (Benvolio). Standing behind are Nicolas Kristensen (Ensemble), Ethan Bhatia (Abraham), and Eli Roberts (Ensemble). Here Tybalt starts a brawl after Benvolio was only trying to keep the peace at the start of the show. Photo by Rachel Lesan, Langley High Senior 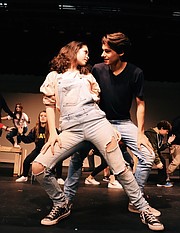 Hannah Cameron-Cadenazzi (Juliet) and Cole Sitilides (Romeo). Romeo and Juliet’s first meeting in the middle of the dance at the Get Out the Youth Vote Party. 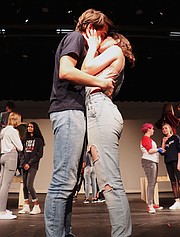 Cole Sitilides (Romeo) and Hannah Cameron-Cadenazzi (Juliet). Romeo and Juliet’s first “Palmers Kiss” in the middle of the dance floor at the Get Out the Youth Vote Party.

Saxon Stage presents “Romeo & Juliet,” William Shakespeare’s classic tale of romance and rivalry set in Washington, D.C. in the late summer of 2020 amidst the heated political climate of an upcoming election. Lady Montague, a single mom and Democratic Congresswoman, matches wits against a well-established Republican Senator Capulet as they attempt to become the next President of the United States. As they strategize how to achieve their partisan goals, their campaign supporters stand passionately behind them, ready to fight against any challenger or opposing viewpoint. However, their teenage children, Romeo and Juliet, have grown weary of the polarized campaign frenzy. They long for the love and attention of their parents, as well as a soulmate willing to make them the center of their universe.

Shakespeare’s poetic text reveals an uncanny relevance to the tribal nature of today’s political environment. Word-for-word, the text rings true and the narrative is as powerful today as it was more than 400 years ago. In Saxon Stage’s production, the title roles will be played by Cole Sitilides, 2019 Cappie winner for Best Actor in Biloxi Blues, and Hannah Cadenazzi, Sophie in last spring’s Mamma Mia. Samuel Buroker as Mercutio, Leland Hao as Benvolio, Chris Morgan as Tybalt, Peter Fox as Friar Lawrence, Samantha Brunjes as the Nurse, Lily Spiller as Lady Montague, and Gunnar Peacock and Hannah Toronto as the Capulets, along with an active ensemble of 35, round out the stellar cast. The technical design team will further support our artistic vision of the show with the use of projections and music to help set the location and mood.

“Romeo & Juliet” opens on Thursday, Dec. 5 and will run through Sunday, Dec. 8. All performances will begin at 7 p.m. except for the Sunday matinee at 2 p.m. Cappies performance is on Friday, Dec. 6. This is the date when all the theatre critics will be invited. Additional information, including how to purchase tickets, is available on Saxon Stage website: saxon-stage.com.